Beautiful projects up in lights

The 2021 Landmarks Trust Awards have been announced, recognising public art works, fine architecture, landscape and the preservation of heritage.

The awards recipients, named this month, are a diverse range of organisations, communities and businesses which have contributed to keeping Hastings beautiful.

The Landmarks Trust was initiated in the late 1990s by then mayor, the late Jeremy Dwyer, to promote Hastings’ identity and sense of place, and foster civic pride. Arts Inc. chairman Andy Heast says Arts Inc. was rapt to win. “It was very special for our Arts Inc. team to be acknowledged for the breadth of what we do.” Achievements include: the

Hastings Community Arts Centre exhibition programme, the 2020 and 2021 Hawke’s Bay Arts Festival, the 2020 Blossom Parade and the ‘Culture Canvas’ murals. Andy says these were designed to celebrate the vibrancy of our arts, and the diversity of our community.

“We are so grateful for the continuing support we receive from the community to achieve what we do, and also acknowledge the strong foundations that have been built by our predecessors,” Andy says. “The arts are an exceptionally positive way of coming together and celebrating our humanity.” Designed to commemorate the Landmarks Trust’s 20th anniversary, the painted stainless steel sculpture represents the cherry blossom Prunus Awanui, the street tree of choice in Hastings in the 1990s.

Philipp chose Prunus Awanui because of its important link to the late mayor Jeremy Dwyer, who developed the Landmarks philosophy in Hastings. Mr Dwyer’s aim was to bring the city back to life after the particularly trying economic times in the 1980s.

“The link was about the planting of the Prunus Awanui that he initiated in Hastings,” Philipp says. “I’m into blowing things out of proportion, or recalling natural objects to bring it into people’s consciousness. It was quite nice to be able to play around with scale.” Society chair Megan Williams says heritage trails are important for tourism, economic development, education and culture. “It’s about highlighting these special places because it is important for local people and visitors to know about their history,” she says. Originally the idea was, from an economic point of view, to give people something more to do in Hawke’s Bay, so they would stay a bit longer and spend money, she says. “But then it became important to highlight the scenic, cultural and historic points of interest in the district.”

The Society created the winning Clive brochure to educate people about the small town’s history. Megan says, “East Clive used to be a thriving village called Waipureku with homes, hotels and shops.” The town moved westward once the railway and bridge were built.

Support from Hastings District and Hawke’s Bay Regional councils has been invaluable. “Hastings District Council have supported us right from the get-go. It’s because of that, that we have been able to keep going.” Rob and Barb Hansen, of Hansen Property Group Limited, have won the Architecture category for their sympathetic redevelopment of the historic Tribune building on Queen St East.

The Hansens saw an opportunity to capitalise on the character of the former Hawke’s Bay Today buildings to create a dynamic urban space in the heart of Hastings. The precinct has been named Tribune as a nod to Hawke’s Bay Today’s former name, Herald Tribune. It features retail, hospitality and office spaces set in an urban landscaped environment.

Mixed-use urban developments can be seen in many cities worldwide, Barb says. “We felt that Hawke’s Bay – with its climate – and in particular Hastings, was more than ready for the concept,” she says. When the Hansens purchased the buildings, they had been unoccupied for years and “in need of some real attention”, she says. “We saw an opportunity to revitalise a slice of Hawke’s Bay history.”

The Hansens are passionate about Hastings and the opportunity the city offers to businesses. “There are a lot of businesses now that are interested in Hastings as an option for their offices. It is becoming a really exciting place to be.”

Auckland architecture firm RTA Studio (which has since set up an office in Havelock North) designed the building. The development is due to be fully completed by the end of March 2022. Owner Greg Edmonds says the group of partners in 40GS brainstormed the project. “It’s a primary focus point from the corner there – we asked ourselves: what can we do that’s going to tie into not only art deco, but also the town itself?”

Local designer Alan Passchier drew the original sketch, and came up with the colour scheme, which enhances every detail of the façade, leaving no nuance of the building’s character omitted. The mural was completed by Brandon Blair of Crimson Flower Ltd, also in Hawke’s Bay.
“The building lends itself, with its alcoves, to that 3D look,” Greg says. “It’s almost got a hotel look on the side there.” The concepts brought that to life, he says. “It’s been a roaring success.” Te Mata Park Trust has won the Landscape award for its newly developed gardens and trails. The new area is an extension of Te Mata Park, the site of Hastings’ most famous landmark.

The Trust raised $2.5 million from the local community and charitable trusts to buy and develop the additional land in 2018 and 2019, protecting this land for the future generations to enjoy. It was opened to the public in 2020. It includes mountain biking tracks, walking tracks, a rongoā garden, tracks suitable for those with compromised mobility and a kid’s biking area.

The rongoā garden is a unique and very special part of the project. Te Mata Park Trust manager Emma Buttle says it’s an easily accessible garden that visitors will be able to walk through, and learn about plants used traditionally as rongoā (medicine). “With an ever-growing interest in rongoā Māori throughout the rohe, such an accessible resource is an asset to the community,” Emma says.

“The maintenance volunteer group (the rongoā roopū), has been named ‘Te Roopu Puke Atea’ by our kaumatua Jerry Hapuku.” The project is overseen by the park’s mana whenua group, with rongoā practitioner Tyne-Marie Nelson supporting the project on the ground, Emma says. The roopū maintain and develop the area; weeding by hand, planting, mulching, and feeding the soil, she says. “They are also building a stream bed through the area with rocks collected from throughout the rohe (district) bringing in that mauri (life essence).”
Rongoā advisor Tyne-Marie Nelson says, "We have planted the area heavily with revegetation species such as manuka, akeake and karamu and will begin to curate the area over time, so that eventually we will have a healthy ecosystem with a diverse range of trees that are talking points for sharing mātauranga."

Anyone who wishes to join the project can contact the Park team on info@tematapark.co.nz Over 150 people attended the 2019 Landmarks Awards at the Havelock North Function Centre on 28th August. Twenty-one awards were celebrated within Landmarks’ four tenets: History, Landscape, Architecture and Art in Public Places, representing a range of excellent projects in our district, many of which have huge volunteer input.

One such is the Supreme Award winner – the Jeremy Dwyer Award for Excellence – which has been run by volunteers for 17 years: the Maraetotara Tree Trust, a wonderful - and continuing - river valley restoration project along the corridor of the Maraetotara River. The project’s aim is to improve the ecosystem and to establish permanent reserve habitats for regenerating native plants, birds and wildlife. 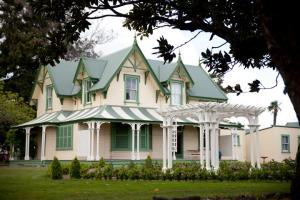 Guest Speaker was Pitsch Leiser, Director of Arts Inc Heretaunga, who described the work of his organisation and encouraged the full room of guests present to support and take part in the District’s creative arts, especially the up-coming Arts Festival.

The Awards recipients represented a diverse range of organisations, communities and businesses. Their contributions to Great Things Happen Here are honoured by the Landmarks Trust’s Awards.

The Supreme Winners, receiving The Jeremy Dwyer Trophy, were the Hawke’s Bay Knowledge Bank and its Volunteers. 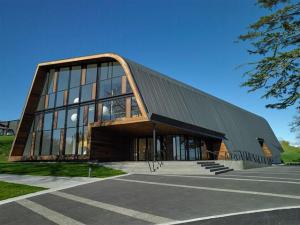 Landmarks celebrated outstanding projects and contributions to the Hastings District at the Landmarks Trust Awards ceremony, with the Mayor, Lawrence Yule, presenting framed certificates to those recognised.

A wealth of talent and commitment has ensured our four tenants of History, Landscape, Architecture and Public Art are alive and well.

Here's what one of the guests at the Awards ceremony commented:

"We were simply blown away by the amount of dedication and hard work that gets done very quietly throughout out District and in lots of different areas.  However, all the results are incredible and this hard work has its own fruits in that Hastings and her surrounds is really looking lovely.  Its down to the energy and extraordinary vision of your team that this work continues and its really heartening.

Please pass on to your team how much we thoroughly enjoyed being part of such a special occasion and we feel truly humbled and proud to live in this marvelous place."