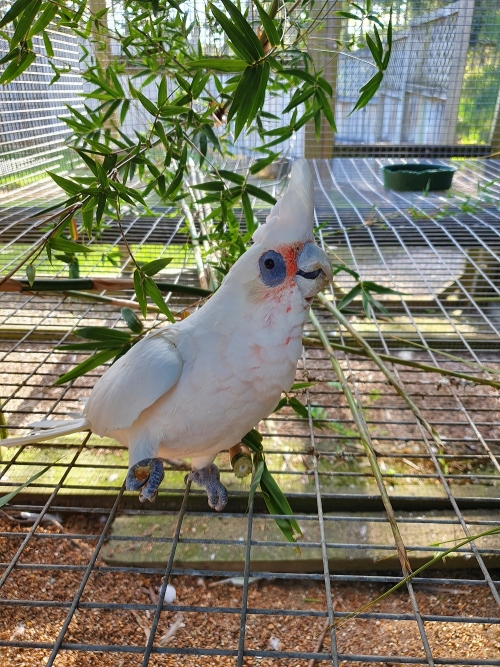 Stevie Nicks, the corella, is happy in her new home.

The enclosures at Cornwall Park’s aviary are to be improved with funding approved to enhance the facility for the benefit of the birds and the people who enjoy this popular attraction.

Hastings councillors approved the use of the budgeted $75,000 funding today to upgrade the existing main enclosures.

The two large parrots, a cockatoo (Mate) and corella (Stevie Nicks) who used to live at the aviary, however, will remain at their new SPCA-approved foster home.

The retention and enhancement of the bird aviary was included in the Cornwall Park Reserve Management Plan (RMP) that was adopted in March 2019, with $75,000 included in the 2020/21 budget to carry out the work.

Late last year, Hastings District Council commissioned concept plans for the upgrade, which included amenity improvements to the main enclosure, and the construction of new enclosures for the two large parrots.

These were endorsed by the SPCA, who also found a suitable, temporary foster home for the parrots late last year in anticipation of the improvement works being undertaken.

While fully costed detail design plans had not yet been prepared, it was likely that the work to enhance the existing enclosures, and construction of new enclosures for the two large parrots would cost more than the $75,000 currently budgeted.

This, together with increasing community concern surrounding the welfare of the two large parrots, including a petition to council that has risen to 1800 signatories over the last few months, meant that council’s operations and monitoring committee today decided to not advance with the construction of new enclosures specifically for the two parrots, and instead focus the funds on the enhancement of the existing enclosures.

This would be in line with its RMP commitments, ensuring there is still a facility for the community to enjoy.

The parrots would remain at their foster home in Northland, where councillors were assured they are healthy and happy.

Hastings councillor and operations and monitoring committee chairperson Geraldine Travers acknowledged the parrots were very popular with the community.

“Things have changed since then though, keeping large parrots in cages in public places is becoming less acceptable and it’s known they need regular attention that we can’t always provide.

“These parrots have a foster home they are happy in, and we will turn our attention to upgrading the other enclosures to enhance the wellbeing of our smaller birds, and for people to continue to enjoy them when they visit Cornwall Park.”

The enclosure upgrades will include putting in new mesh, more water features, enhanced shelter and perches and the partial partitions will be removed to allow the birds to have free flight runs.

In addition, council officers are currently working with SPCA on an Aviary Management Plan that will include policies on bird species, numbers, cage layout and population management.

“Some of our people have grown up visiting those birds, and in 2018 we heard that the community wanted them to remain at Cornwall Park.