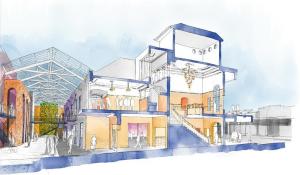 An artist’s impression of what the Hastings St entrance, and adjacent laneway, to the Municipal Buildings could look like.

A major milestone has been reached for the redevelopment of the iconic Municipal Buildings with a concept design developed to achieve the vision of an arts precinct in the heart of Hastings city.

The concept was drawn from community feedback that was sought in 2016 and then consultation carried out by a working group in 2017.

Through that process, which included consultation with the wider public, the arts community and Ngāti Kahungunu, it was identified that new uses for the buildings needed to be identified before earthquake strengthening and redevelopment started.

The resulting proposal, formulated by Matthews & Matthews Architects Ltd, together with Dena Aroha Bach, is a dramatic reworking of the former civic buildings to create a modern, dynamic space that also pays homage to the structure’s history and distinctive architectural features, guided by the underlying conservation plan.

Included in the concept design is the creation of two dramatic main entrances, one on Hastings St and one on Heretaunga St.

On Hastings St a double-height void is reinstated over the main stairway creating a generous, light, welcoming introduction to the building and the Assembly Hall.

Similarly, the Heretaunga St entrance could be double-height, with ground floor retail spaces underneath, including openings between the shop walls to provide for arts performances, workshops, installations, studios and service areas.

The Borough Council Chambers and Assembly Hall are retained with only minor alterations for ongoing use for performance, gatherings, workshops and training.

A laneway is proposed to run between the Opera House and Municipal Buildings, which currently is little more than an access alley, and could be transformed into a vibrant, light, spacious thoroughfare that celebrates the architectural and urban qualities of the surrounding structures and could house a café and bar.

Cultural and quiet, reflective spaces incorporated in the buildings could highlight the local stories of Ngāti Kahungunu and Aotearoa – aimed at re-engaging the collective memories associated with the buildings and area, to be passed on to younger and future generations.

Hastings district facilities and programmes group manager Alison Banks said the overall concept successfully captured the aspirations of the community to create a dynamic home for a wide range of cultural and performing arts.

The next step would be to share the concept design with the wider community, and a meeting will be held in the Hastings Art Gallery in early September as the first steps of consultation.

Mrs Banks said this would be an opportunity for people to hear more about the Municipal Buildings concept design and progress on the entire Opera House precinct project to date.

Hastings Mayor Sandra Hazlehurst said it would also be a chance for our people to share their own experiences and stories.  “Everyone has a story to tell about the Opera House and we will love to hear from the community.”

The Hawke’s Bay Opera House & Arts Precinct community meeting will be held at the Hastings City Art Gallery on September 12, from 6pm to 8pm.

Back to Municipal Building