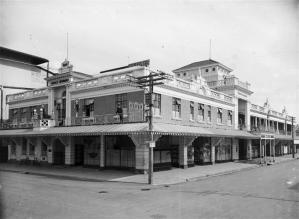 An early image of the Municipal Building, date unknown

The Municipal Building is to undergo earthquake strengthening work following a recent council decision to approve the works at a cost of $8.8 million, as part of the process of redeveloping the wider arts precinct.

In 2016, when the council held a full consultation process to help find the best way forward for the Opera House, Plaza and Municipal Building, the public agreed that a new use or uses needed to be found for the Municipal Building.

At the end of last month the council considered the need that had been identified to strengthen at least part of the heritage-listed building to enable full use of the Opera House.

During the process the council received legal advice that any attempt to demolish the Municipal Building would, if challenged, have a very low prospect of being approved.

Heritage New Zealand also confirmed that they would not support demolition, and would submit against any demolition proposal put forward.

As such, the only practical option left to the council was to approve the decision to strengthen the building, with the costs covered from funds already allocated in the 2018-2028 Long Term Plan.

External funding support would also be sought to help fund this strengthening work.

Under the early contractor engagement contract Gemco Construction had been awarded the earthquake strengthening contract, and the council was scheduled to submit a building consent application for the work this month.

In the meantime initial draft concepts for a future use of the Municipal Building had been released for the public to consider, and more comprehensive consultation on these would be held next year including cost estimates and a supporting business case.

The council’s Opera House arts and precinct committee chairman Malcolm Dixon said the decision to strengthen the Municipal Building coincided with the concept plans for use of the building going out for public consultation.

“These are exciting times for all concerned as this building is part of Hastings’ historic heritage.

“As part of the precinct it is ideally sited to become an integral part of our future.”

Back to Municipal Building