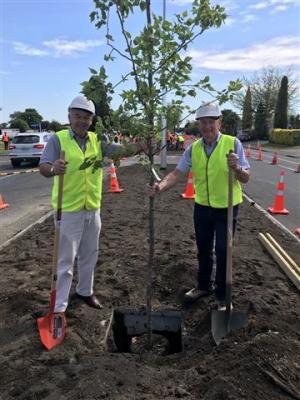 Hastings District councillor Kevin Watkins, left, and Havelock North Rotary Club president John Pollard were among a large band of volunteers who took about an hour and a half to plant the new trees on Napier Road.

With the roadworks in Napier Road nearly complete, a number of people gathered today to plant 21 new trees along the central median strip.

The original trees were planted as a Rotary Club of Havelock North beautification project in 1973, so the council invited club members to help with the new planting project, to mark another era in Rotary service to the community.

The Bradford Pear was the chosen tree species to be planted, and councillors, staff, Rotary Club members and a band of volunteers were all on board to re-plant the area today.

Council works and services committee chairman Kevin Watkins said he was delighted that Rotary was present to help with the replanting.

“I was even more delighted that one or two of the Rotarians who were involved in planting the original trees were here.”

While it was sad to lose the original trees for the greater good of installing the water main, which had to go in quickly, he said he was pleased that that project was on schedule.

“No doubt the new variety of trees will add a new vibrancy to this section of road.”

Havelock North Rotary Club president John Pollard said Rotary welcomed the opportunity to be involved in the selection and planting of the replacement trees, one of a long list of amenity and environmental improvements the club had carried out since it was formed in 1963.

“Past and long-standing members understood the need to upgrade the infrastructure in Napier Road but were disappointed that this may have been at the cost of the original plantings.

“However, through co-operation and goodwill, the Hastings District Council’s infrastructure improvements will be completed and very appropriate replacement trees planted.”

He said it was nice to be joined by club members Peter Longstaff and Ewan Wallace who were present at the first planting day in 1973, and on behalf of the club he thanked all those who had worked to achieve the happy result.

The Bradford Pear has an even “pyramid” shape with densely packed branches, producing a profusion of early spring blossom, with leaves that turn red, orange and maroon in Autumn.