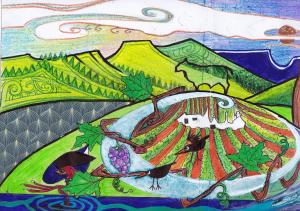 The designs for two prominent public murals in Hastings have been revealed.

Cinzah Merkens, a Hawke’s Bay-based multidisciplinary artist, event producer and curator has been chosen to carry out a 180m2 work in Hastings central city. The second artist, who will complete a 50m2 work within Havelock North’s Village Green, is JiL Sergent, known as JiL of Aotearoa, also based in Hawke’s Bay.

Cinzah is likely best known in Hawke’s Bay for his massive works in Napier as part of the Murals for Oceans project. However, as a muralist he has left his mark on walls across the world, including in Mexico, Estonia, San Diego and the West Indies.

His design for the Hastings project is anchored by a massive kahu, or New Zealand hawk. He said he sought advice from Ngāti Kahungunu elders before deciding on the direction of the work. He was inspired by an iwi whakatauki (proverb): ‘Te haaro o te kahu ki tuawhakararere’, which means ‘View the future with the insight of a hawk’.

“I felt this proverb to be fitting, as on a physical plane it speaks of the vast area the kahu travels and its farsightedness as well as, spiritually speaking, for future generations. The main central component of the mural is the kahu, representative of all people living in Heretaunga, in mid-flight, acting as a kaitiaki or guardian for all people and the region’s land.”

The work also depicts Te Mata o Rongokako (Te Mata Peak), Te Matau a Māui (the constellation Scorpio – an important navigation pointer for Māori), a grape vine representing the agricultural history of the region, and a stylised topographical map of the region, “with all its major waterways, streams, roads and townships”.

The work by JiL of Aotearoa is called Tūrangawaewae; featuring the Hawke’s Bay coastline with a stylised art deco sun. A prominent feature is Buck House, designed by internationally renowned New Zealand architect, the late Sir Ian Athfield. In the mural, as in real life, the house is surrounded by vineyards.

Tenders were called in March, with a requirement that the works should relate to the space they were in, telling the story of their location, which could be cultural, architectural, historical or environmental.

Overseen by the Landmarks Trust, the submissions were assessed by a panel. Six submission were received for each of the walls and the decisions on the artists were unanimous.

Hastings District councillor Wendy Schollum, who was on the panel, said the quality of the submissions for both sites was outstanding. “The diverse range of perspectives of our district, from both experienced and passionate new artists, challenged the panel to consider both our past and future.”

She is looking forward to seeing both works in place. “Cinzah’s mural shows perceptive consideration of and respect for our heritage and key landmarks, while JiL’s playful use of bright colours and iconically Havelock North symbolism will compliment one of our most vibrant spaces perfectly.”

Council will prepare the spaces for the artists, after which they will be responsible for the project.

The two artists have indicated that they will start work in August/September.