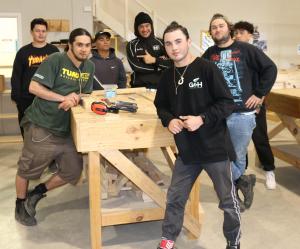 On board: Anthony Heeney with his at G&H Training classmates.

Anthony Heeney is living proof that a tough upbringing does not have to define a person’s whole life.

Anthony received a Youth Potential Award at Hastings District Council this month. The awards celebrate youngsters who display ‘he pito mata’, or strong character against the odds. The award categories are Tane (Male), Wahine (Female) and Roopu (Group).

Despite having very few positive role models in his early life, the 18-year-old is on the path to fulfilling his desire to become “an excellent builder”, working himself into a position where he can be a provider for his future family. He is determined that his past will not “drag him down”.

To get on his way, he is completing carpentry foundation courses at G&H Training, where he is impressing his Te Aka Iwi in Education programme support person Maureen Box.

“I felt really proud of him, I have known him since earlier in the year and I’ve noticed his growth and confidence developing over those months.  He’s focussed, and he works hard and he just wants to do well, get a job and make something of himself.”

Drugs, alcohol and gangs were a feature of Anthony’s childhood, but his life now is very different, and very much better.  “I’m fortunate that I have my girlfriend’s family helping me; they’ve helped me get into good routines.

“It’s good being with a whole family that goes to work; it helps me want to go out and get a good job and build a house.”

A strong interest in tikanga is also helping him. He and his G&H Training classmates developed a haka, for which Anthony wrote the words.

“A part of it says: ‘to help each other lift’, because teamwork is key; when people help its better than trying to do things on your own. The boys performed the haka as I was going up to receive my award – it was really uplifting and gave me the courage to do my speech.”

Anthony is keen to be a role model to younger members of his family. A lot of that is about proving that education and then working for a living are good goals. “I want to go from here into an apprenticeship and a job, that’s what I really want.  I want to become a full-time carpenter – set goals and reach them. I want to earn my own money. I want to do something because when people sit at home getting bored, they get into trouble.”

To others who may be trapped in a similar position as he was, he has some words of advice. “I would tell the person to live life and be happy about every second that they have.  You only have one life and you don’t want to ruin things; you need to spend as much time doing fun things and love your family even if they aren’t what you want – that’s the only family that you have.”

The full list of award recipients (and their nominators) for 2018 is: