Top teams battle it out at annual chess tournament 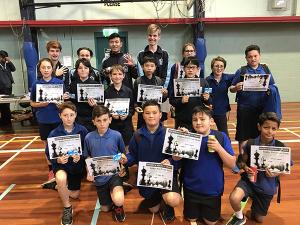 The Hasting Sports Centre was a scene of intense concentration on Friday last week (August 17) when the Hawke’s Bay Districts Interschool Teams Chess Tournament was held.

“It’s remarkable that Nuhaka not only won the Primary A and B grade but also the Intermediate B Grade,” Mr Earle said.

He also noted Napier Boys’ High School’s strength in the Secondary Schools section, and said all the teams’ successes were testament to the support of their teachers and coaches.

The annual Teams tournament had been run for several years now, and Mr Earle made special mention of Sally Rice from Peterhead School who was heavily involved with this event as well as other school events for the last 30-odd years.

“She’s been the driving force behind the teams event – over the years her contribution has been marvellous.”

The A grade winners of this tournament will have the chance to compete at the National Interschool finals in Mount Maunganui on September 29 and 30 this year.

This tournament is one of three hosted by the Hastings District Council each year, with the final competition – the Junior Hawke’s Bay District Chess Tournament – scheduled to be held in October.