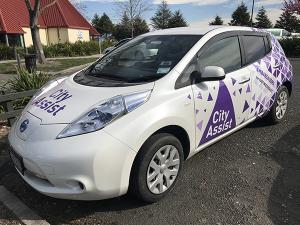 The City Assist programme increased its visibility this month with the launch of new, colourful branding for the team’s vehicle that’s used across the Hastings district.

Picking up on the purple hues of the team’s uniforms, the striking new look will help identify the car and the services the friendly City Assist ambassadors offer.

The City Assist team has been patrolling the streets of Hastings since 2013, ready to step in to guide people, or alert the police, if there’s unsociable behaviour, as well as provide assistance to tourists and visitors.

It was initially trialled in response to community concerns about safety in the town centre area and a desire to limit anti-social behaviour.

As well as deterring trouble and reporting suspicious behaviour the team members model positive behaviour, direct people to social agencies, act as an information service for residents and visitors, and connect with the suburb’s young people.

A survey of Flaxmere residents and business owners showed unanimous support for the team, with 100 per cent saying they felt safer since it was introduced.

Councillor Henare O’Keefe said the new-look car was another way to spread the message about the service and the good work it was doing.

“You can’t legislate this kind of stuff.”

He also noted that the City Assist programme had been complemented by the addition of three Kaitiaki in Flaxmere, focused on connecting youth with the wider community, and promoting community safety.