Slips and floods across the road network 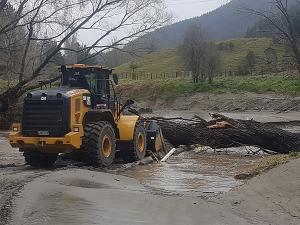 Road crews are on their third day of clean up in Hastings as the rain continues to fall in Hawke's Bay.

As of Friday morning (September 7), almost 50 rural roads across the district were affected; some in multiple places.

Puketitiri Rd was a good example, said incident manager Alison Banks. "The road is affected by slips in 13 different places. Our crews are out on the ground across the district; clearing slips and moving trees and boulders.

"The roads are being prioritised based on the severity of the damage and the amount of traffic that uses them.

"Some roads are affected by flooding, and in those cases the only thing we can do is wait for the water to clear. We do want everyone to know that we have a great deal of manpower out working in the field, but it is going to take time to get everything back to normal."

The main message from Council was that drivers needed to take extreme care, particularly on rural roads.

"This is a changing situation and with the ground so sodden we are likely to see more fallen trees and slips occur. We cannot stress strongly enough that drivers need to be on high alert in rural areas, particularly when rounding blind corners."

Maraekakaho was another area quite badly affected, with 13 roads in the area affected by slips, flooding and debris on the roads.

It was likely to take two to three weeks before the whole clean-up was completed, said Ms Banks. "However, by prioritising we will ensure that the issues with the most impact are dealt with as quickly as possible."

In the urban area, roads had suffered only minor issues and teams had been able to deal with them rapidly. Rain water ponding had affected a few low-lying properties but there had been no reports of water inside homes.

The wastewater network had performed well but there had been isolated issues at private properties. On Thursday Portaloos were deployed to eight homes where toilets were not flushing due to wastewater back-up. The problem had eased and most of the portaloos were removed this morning (Friday).

Council said the issue was caused by storm water entering the wastewater system in those areas. Investigations would be undertaken to confirm that, and measures taken to reduce the likelihood  it happening in the future.

The wastewater pump stations were working at full capacity at the height of the rainfall but levels had since returned to normal.