Classes a chance to exercise and socialise 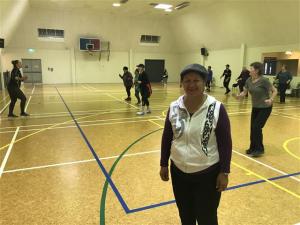 Wairakau Vercoe is a real champion for the classes, encouraging others to “get off your butts” and join in.

Since they first started about three weeks ago the strength and balance and badminton programmes run at Flaxmere Community Centre have grown in popularity, both for their physical benefits as well as social ones.

The free classes are run four times a week for people aged 60 and over, comprising four one-hour sessions with physical exercise targeted at strengthening the shoulders, hips and joints.

Numbers taking part have swelled from about six at the beginning to more than 20, with participants enjoying badminton and the upbeat strength and balance classes set to music and tailored to their capabilities.

After each class attendees are invited for a cup of tea and some home cooking prepared by staff and others in the community centre kitchen, and will often spend as much time chatting and eating as they do in the class.

“We are making things like scones and soups – a couple of weeks ago we had seafood chowder - they love coming here to hang out and I think that’s part of what brings them back.”

She says it’s also nice to see that interaction continuing outside of the programme.

“They are starting to look out for each other out and about – it’s really neat to see, it’s an awesome vibe.”

The participants themselves are also vocal in their praise for the programme.

Wairakau Vercoe has been attending right from the start and advocating the classes to others telling them: “Don’t sit on your butts at home - come over and join in – come and do some exercise and meet people.”

She’s also a fan of the post-exercise mingling, noting the potential pitfalls.

Wairakau says the trainers go above and beyond to ensure everyone enjoys themselves.

“Our trainers are the bomb.”

The strength and balance programme runs on Tuesdays and Thursdays, 11am to 12pm, and the badminton classes for seniors are held every Monday and Friday from 11am to 12.30pm.