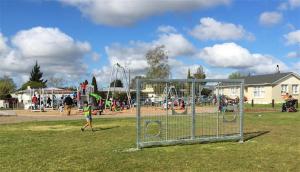 Families flocked to the opening of the upgraded Hugh Little Park playground in Flaxmere last Friday.

The Hugh Little Park playground in Flaxmere has been upgraded and was officially opened to a large crowd of children and adults on Friday last week.

Situated off Montrose Street in Flaxmere East, the playground was due for renewal as the equipment that was first installed in 1976 had reached the end of its useful life.

Two consultations on the future of the playground and what it would look like and comprise were held in March this year.

The community was given a choice of concept designs to choose from and the one with the most votes was implemented.

While the previous playground had only three activities, the new playground has elements of the existing one with additional climbing and sliding equipment, and a mega swing.

There is also a multi-goal to practice both rugby and soccer kicks and passes.

The area is surrounded by a circular footpath, which gives young scooter riders an off-road path, and gardens and trees have been planted to beautify the area and provide shade in the future.

Flaxmere councillors Jacoby Poulain and Henare O’Keefe attended the opening and Ms Poulain said she was delighted to see the park up and running.

“It has taken a lot of planning by council and I know the community has been looking forward to its opening.

“The park is situated among a resident population, which includes many children. I am sure it will be well utilised and I hope it brings much joy and happiness to our children and their families.”

At the same time as the Hugh Little Park consultation, the community was asked for its views on the playground at Sunderland Drive Reserve.

This is due to open soon, and will also feature different play elements.

Meanwhile, late last week a new basket swing was installed at Essex Crescent Reserve in Whakatu - the first stage of a bigger plan to upgrade the green space making it more family-friendly.