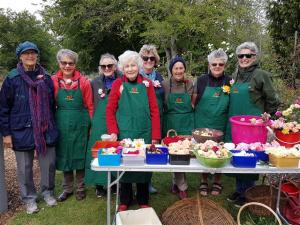 A love of roses, live entertainment and a fantastic venue drew more than 500 people to Rose Sunday at the weekend [November 12].

The roses turned it on with the more than 5500 bushes blooming for the day. It was the 50th anniversary of the rose gardens and it is intended that the event, which used to be held annually, will once again be held every year, in November.

Rose Sunday was organised by the Hastings Rose Society and Hastings District Council. The crowd lapped up the live music and the children fell in love with the ponies giving pony rides; there was face painting, big bubbles and blue blocks to play with, and, of course, the roses to admire.

Hastings acting mayor Sandra Hazlehurst unveiled a plaque acknowledging the donation of a pavilion in park, made by the rose society and the Lattey family.

Rose society president Cheryl Lattey said the afternoon was an outstanding success despite the weather being cooler than normal for the time of year. “Our society is very proud of the rose gardens that have been a major part of Frimley Park and Hastings for 50 years. Seeing the joy of visitors’ faces is a real pleasure and we are already looking forward to next year’s celebration.”

The 47 acres for the park was donated in the 1950s by Elsie, Arnold and Heathcote Williams, the three children of James and Mary Margaret Williams, in memory of their parents. The family owned a 3000-acre station they named ‘Frimley’ after a village in Surrey, England.

As part of the development of the park, the Hastings Rose Society took charge of developing a comprehensive rose garden from 1965. Half the proposed number of rose bushes, 20 of each cultivar, were planted in the first year, with the same number planted over the following two years. Those 4000 bushes across 300 varieties have now grown to more than 5500.