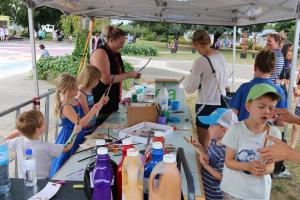 There was just one place in New Zealand to celebrate wizardry alongside millions of Harry Potter fans on Thursday evening [February 1], and that was at Hastings War Memorial Library.

More than 1000 Potter fans young and old hunted for dragon eggs, were sorted into their Hogwarts School houses, had their house colours painted on their arms, made their own wands, called in to the Diagon Alley Bookshop, and visited Hagrid’s Hut.

Thousands of schools, libraries and a raft of other organisations across the globe - from Gurgaon in India, to Edmonton in Canada - joined in on the international Harry Potter Book Night. The event was first held last year, as the 20th anniversary of the publishing of the first volume was nearing.

The event was organised by Hastings District Libraries and Hastings City Business Association staff who went above and beyond their normal duties; painting rocks for the dragon’s eggs, sourcing local actors to play key Harry Potter roles and designing a realistic ‘sorting’ hat.

Hastings District councillor Wendy Schollum, a self-confessed Potter fan, as are her children, said the evening was brilliant on many levels. “They took the best of the magic and fun from the Harry Potter series and brought it to life.

Mrs Schollum was among hundreds to take her turn under the sorting hat and was put into the House of Hufflepuff.  “Events like these are a wonderful way to introduce a new generation of children to the library and the stories, which encourages literacy and sparks interest in other books.”

“Technology has dramatically changed the way people find and enjoy books and stories, and the way that we can put together activities that build on and encourage a love of those tales.

“This is the perfect example of one of those events that, as well bringing stories to life, draws our community together. It is made extra special that with this event we are part of a world-wide celebration of books.”