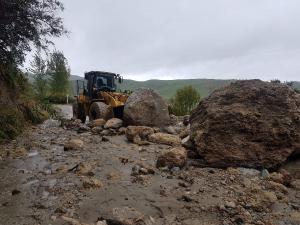 In the wake of localised flooding yesterday, the focus today is on contacting people who have had flood waters through their homes.

Hastings District Council has teams in the worst-hit areas around Esk Valley and Rissington, calling door-to-door to assess homes and the needs of residents. A desk-top exercise overnight indicated that in excess of 80 homes will need to be visited. Hawke’s Bay residents who have concerns about their home or who need welfare assistance can call Council (24-hour phone 871 5000).

An incident response was activated yesterday (March 8) after heavy rain fell in the area over a short period of time. Over 24 hours from just after midnight on March 8, the Glengarry rainfall gauge (Esk Valley catchment) recorded 312mm of rain, with 150mm falling in just three hours between 5am and 8am. That rain rapidly raised the Esk River levels, threatening homes and properties.

One school, a campground and residents who were at risk of being trapped by flood waters or whose homes were flooded, self-evacuated. A registration centre was set up, however a Civil Defence Centre was not required as residents went to family or friends.

At the height of the incident, both state highways and several local roads were closed. NZTA advises that State Highway 5 and 2 are open today. Locally Glengarry Rd remains closed, expected to be open by lunchtime. Makahu Rd in Puketitiri is closed at the ford. All road users are being advised to take extra as there remains debris on a lot of roads and the risk of surface flooding remains.

Hastings District Council incident controller Raoul Oosterkamp says that it may take several weeks for road teams to clear all slips and debris, and to reinstate roads where there had been washouts.

Overnight, rain intensity slowed and no calls for assistance were received. While more heavy rain is forecast today, it is expected to be spread over longer periods of time. That meant rivers were not expected to rise rapidly, as occurred yesterday.

In the meantime both Hawke’s Bay Civil Defence Emergency Management Group and Hastings District Council’s incident teams are planning for the arrival of Cyclone Hola, expected to impact New Zealand early next week.

“While the exact track of the cyclone is unknown at this stage, we do want to be ready in the event that it arrives in Hawke’s Bay. With our already sodden soils, there is a risk that the impact could be major if it does make landfall in our area,” said Mr Oosterkamp.