Digging in to keep reserves beautiful 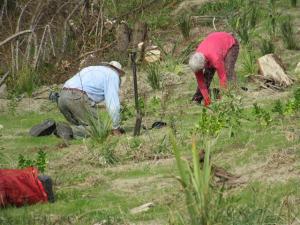 The first of New Zealand’s official urban land care groups started just over 20 years ago in Havelock North, put together by residents, supported by Hastings District Council. The group has been looking after the Karituwhenua Stream in Havelock North since 1992. Originally an erosion-control measure, it developed into a planted walkway in 1996 after a great deal of work by members of the group.

It has proved hugely successful, now operating largely autonomously with its own fundraising and working bees.

A number of the district’s reserves now have groups of residents volunteering to support the Council in the management and development of the reserves. Another group that has been operating for some time is the Waipatiki Bush Reserve who look after the local reserve. They are involved in pest eradication and new plantings. A long-standing volunteer group is also run by the Te Mata Park Trust at Te Mata Park.  Newer groups include Tainui Reserve, Duart House and Garden and the recently established Palmbrook Reserve Care Group.

Tainui Reserve Care Group has been going for just over a year. Graeme Jackson walked through the reserve most days, and said there was real satisfaction in being involved in its upkeep. “It’s about locals being involved with the community. We do things like plantings, spreading mulch, new tree watering and wilding tree removal. Council does the big tasks, and we follow up with maintenance.”

With nearly 260 hectares of reserves to look after (as well as sports fields, public gardens and playgrounds), help from the community is very welcome, says Council’s economic development and urban affairs committee chairman Damon Harvey.

“As well as being a practical help to keep our reserve areas in the best shape we can, it also allows the community to have real input into how they are shaped; things like the plants used and planning of tracks.

“To top it off, they are also great social occasions with new friendships forming over a common goal.”

There is a growing number of people wanting to be involved, who are very interested in waterway restoration and biodiversity, and “that is wonderful”, said Mr Harvey.