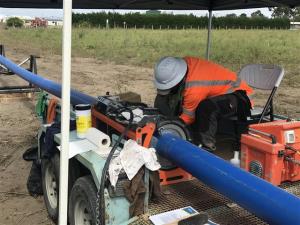 As drinking water and wastewater pipes are threaded through the newly zoned Omahu industrial area, land owners, developers and potential tenants are lining up to make the most of the new opportunity.

“That the opportunity this rezoning offers is being taken up so quickly is important for several reasons,” said Hastings District Council’ s economic development and urban affairs committee chairman, councillor Damon Harvey.

“Development will lead to a marked increase in employment opportunities, and an increase in income and turnover in our region. Having such high interest in development is also a positive for ratepayers, as developers are required to pay for the infrastructure by the time consents are lodged, so there is not the holding cost that can happen with slower development progress.”

The zone covers almost 65 hectares along the north side of Omahu Rd, requiring just over 2800 metres of water pipe and a fraction over 2000m of waste water pipe. Once the pipes are in, an emergency services right-of-way will be formed through the area. Storm water systems will be put in by the developers of the sites, with design governed by Resource Consent conditions.

The installation of the pipes has been timed to service blocks due to be developed first.

It is expected that once the zone is fully operational, it will provide about 1250 jobs.

Most of the infrastructure installation is occurring off-road, however there will be short periods when there will be work at four intersections along Omahu Rd, where new pipes join the existing pipework. This will be undertaken on Friday evenings and Saturdays when at all possible, to avoid the busy working week times, with work on the first intersection (Raupere and Omahu roads) expected to be undertaken on March 24. Two way traffic will be maintained however traffic management will be put in place a couple days earlier.