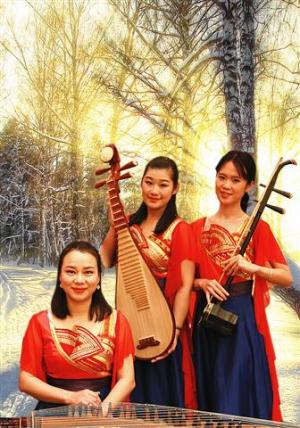 In what is a real coup, three Chinese musicians are flying 10,000km to perform for two nights at this year’s Lighting of the Osmanthus Gardens, courtesy of the Guilin Foreign Affairs Office.

It will be just one of the new, very special, features of the lighting of the gardens, on five nights from Wednesday, said organiser and Hastings District councillor Kevin Watkins.

“We are absolutely delighted that these musicians from our Sister City Guilin are travelling a round trip of almost 20,000km to add a real Guilin musical experience to the lantern festival.”

The musicians will be in New Zealand for just the weekend, flying in on the Friday, playing on the Saturday and Sunday evenings, and then flying back home to China on the Monday.

“That is a very big commitment. They will be playing traditional stringed instruments and dressed in the very colourful minority costumes found in and around Guilin and the Guangxi Zhuang Autonomous Region. During the breaks in their programme they will be walking around the garden and people are welcome and encouraged to enjoy having photographs with them.”

That was not the limit to the live entertainment for this year’s festival, the ninth Lighting of the Osmanthus Gardens.

For three evenings, from Wednesday to Friday, Evy Tian will play the ‘pipa’; a traditional Chinese instrument. Sometimes called the Chinese lute, Ms Tian describes it as a pear shaped wooden instrument with four strings. It has been a mainstay of Chinese music for almost 2000 years.

Ms Tian had played the instrument for 12 years and had reached a very high level of skill, said Mr Watkins.

There are more floating lanterns being installed this year, with another four of the huge lotus lamps first imported last year, arriving in time for the festival.

“That will make eight placed in the larger of the two lakes creating a stunning visual as darkness descends on the garden,” said Mr Watkins. “The lotus is regarded in China as one of the top 10 flowers.  It is a remarkable flower, noted not only for its ability to grow in muddy ponds, but also for its beautiful colours, size, and the richness of its symbolism.”

Mr Watkins said Chinese interest in the event is high, especially in Guilin. “The musicians are travelling here with the assistance of the Guilin Foreign Affairs Office and their commitment is very much appreciated.”

The lighting of the gardens will be on from Wednesday to Sunday (April 4 to 8), 6pm to 10pm, with the first 200 visitors on the Wednesday evening receiving a free ice cream. The live music will play from 6pm to 9.30pm each evening.  Entry is by gold coin, by way of the Tomoana Rd main garden gates, with the exit through the north eastern side of the garden into Cornwall Park.