The Lighting of the Osmanthus Gardens has again been a resounding success – with live music adding to the atmosphere for the first time.

The highlight this year was “undoubtedly” the Chinese musicians, said Hastings District councillor and event organiser Kevin Watkins. On the first three nights of the five-night festival [finishing April 9], Evy Tian played the pipa, a traditional Chinese four-stringed instrument, sometimes compared to a lute. Ms Tian, who is based in Wellington, had played the instrument for 12 years to the highest level.

On the last two nights three musicians from Hastings sister city Guilin had played at the gardens. They flew in from China on the Friday to play on the Saturday and Sunday evenings, and flew home on Monday morning. 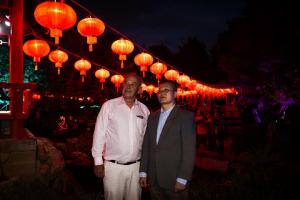 ans. To fly the 20,000km round trip to play at our gardens during our lighting festival was just incredible. These musicians are at the pinnacle of their musical careers; we are honoured and cannot thank them enough.”

And the musicians were as excited as the crowd, he said. “Evy went back to Wellington buzzing; she just loved it and kept thanking us for the opportunity.

“Our three who were here from China for the last two nights were so excited. They said the people were so lovely and kind, and so keen to have their photo taken with the musicians when they took breaks from playing to stroll around the garden.”

On the last night, the trio played “a stunning version” of Pokarekare Ana on their traditional instruments. “That was really special and the crowd loved it.”

As always, the coloured traditional Chinese lanterns were stars of the show, with four more of the large floating lotus lamps imported for this year’s festival.  “We had every age group through the gates, from littlies with their parents, to teenagers and older folk. The atmosphere was fantastic and the feedback amazing,” said Mr Watkins.

There was another special visitor this year, with the China Culture Centre director Zongguang Guo driving up from Wellington on Thursday, especially to enjoy the festival. Mr Guo was impressed, said Mr Watkins. “The atmosphere, the authenticity; he was very impressed with the whole festival.”

Next year’s festival will be the tenth, and Mr Watkins was already hatching plans to make it extra special. “But this year’s musicians will be a very hard act to follow.”

The koha of a gold coin per adult went straight back into preparing for the following year’s festival, said Mr Watkins.