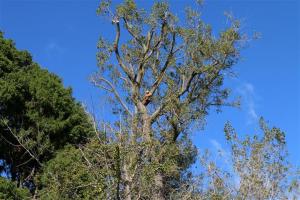 Carefully, piece by piece, New Zealand’s oldest and largest deciduous tree has had a trim – all in the aid of extending its life for as long as possible, while ensuring it does not endanger park users.

The Frimley Park poplar has been surrounded by a security fence since November when movement in its base triggered further investigations. Following input from independent arborists, the decision was made to remove about 10 per cent from the canopy of the tree, which would lighten the load on the base of the tree by about half.

World champion tree climber and veteran arborist Scott Forrest was at the top of the tree yesterday [April 18], halfway through a process that was expected to take about three days. On day one (Tuesday), he was joined by young up-and-coming arborist Devon Judd.

“This is the calibre of arborist we need for this work given the age and importance of the poplar,” said Hastings District Council head arborist Steven Leggett.

“Contractor Hawke’s Bay Tree Surgeons is using a scientifically prescribed method to take the weight from the top of the tree. It is targeted pruning that achieves a balance between removing weight and stress, while leaving the limbs and foliage that enable the tree to remain vital,” he said.

Hawke’s Bay Tree Surgeons co-owner and lead arborist Jonty Apatu said getting that mix right to reduce the risk of limb drop while limiting the impact on the vitality of the tree was crucial. “Through this work we hope to retain this tree for many to enjoy for as long as possible.”

The arborists were also checking for any disease in the canopy while they were in the tree top, Mr Apatu said.

The work was being closely followed by arborists across New Zealand and further afield, said Mr Leggett. “This is believed to be the largest deciduous tree in New Zealand and the tallest of its species [Populus deltoides - also known as American cottonwood, necklace poplar or black poplar] in the world. The interest in the process, given the age, size and fame of the tree, is very high.”

The tree was planted in the 1870s, putting it at about 150 years old. Until this work, it was the tallest tree in a park or reserve in Hastings, however that title would now pass to Havelock North’s gum in the Village Green. The Frimley Park poplar would still hold the largest girth record of any tree in Hastings’ public parks and reserves, measuring 10.17 metres.

But its reputation has spread far further than Hastings. It is listed as a ‘notable tree’ on the New Zealand Tree Register. The listing describes it as the “largest known plains cottonwood in the world” and holds quite a lot of detail on the tree. The genus was believed to have originated in France with the earliest known plant sent to Canterbury in 1852. It is an ancestor to the Frimley Park tree. In New Zealand botanists have given the genus the local name of Frimley, after the Frimley Park poplar.

The tree also gets a special mention on a Wikipedia page dedicated to the species. “The largest recorded cottonwood tree in the world is the Frimley Park tree located in Hastings, New Zealand and measures 138 ft (42 m) tall, 111 ft (34 m) wide and 33.4 ft (10.2 m) in girth.” The next tallest recorded specimen is in Montana, with a height of 33, so even with the estimated 8-9m trim it may still hold its title.

Mr Leggett said plans for its replacement were in hand, given no tree could live forever. About 10 years ago a former Council arborist had planted three poplars from the parent plant, ensuring the DNA continued. All three were close to the parent plant and a decision on which would be specifically nurtured as a replacement would be made in the future.