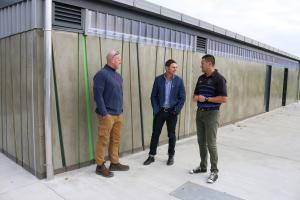 There will be no more cold showers after sports matches at Anderson Park with the completion of a brand new changing room facility this week.

The rooms will get their first workout this Saturday, when some 500 children turn up to play rugby on Saturday morning. In the afternoon the Havelock North Premier rugby team will host Central Hawke’s Bay’s Central Club.

“This is a 5000 per cent improvement. It’s fantastically light, the changing rooms and shower facilities are brilliant, and water in the showers is hot. It has been a long time coming and our Anderson Park community will be very pleased to have it.”

As well as being “old and cold”, the previous 58-year-old changing rooms were found to be earthquake prone during an inspection of all Council buildings.

The new $1.1 million dollar building has changing and showering facilities for both home and visiting teams, toilets, and first aid and referees’ room. It also has public toilets that are accessible regardless of whether the rest of the facility is closed. They will be open during the day, seven days a week.

Representatives of the main codes that use the park, cricket and rugby, had a walk-through of the new facility this week and were impressed. Havelock North Rugby Club president Conrad Waitoa said it was great that the work had been done before the club’s 125th anniversary next year. “It’s a facility that our whole district can be very proud of; and we’re more than sure the teams visiting to play will be rapt as well.”

The changing rooms at Bill Mathewson Park are also being upgraded, with the work due to be completed by the end of this month.