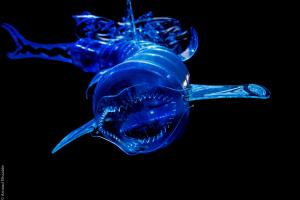 An installation at HCAG, titled Bottled River, will focus on the state of freshwater in the region. Nuku is particularly interested in exploring ideas such as the degradation of rivers that led to the extinction of the once plentiful ūpokororo fish. The artwork will form part of the EAST exhibition, featuring the work of a range of Hawke’s Bay artists, which opens to the public on Saturday 11 August.

The full-scale exhibition George Nuku: Bottled Ocean 2118 follows, showing at MTG Hawke’s Bay from Friday 24 August. Creating an immersive vision of a future underwater world, Bottled Ocean has been presented numerous times globally, from France to Taiwan. This production at MTG marks the first major show of Nuku’s art in his home region and will feature new work with a local context.

Of Omahu Marae, Nuku began his art career in 1984 with traditional Māori carvings in bone, wood, stone and shell. His use of synthetic materials such as polystyrene and acrylic plexiglass from 1990 marked a major conceptual and aesthetic shift, while the ever-increasing proliferation of plastic in the sea led George to create the original Bottled Ocean in 2014.

“I say that I now speak fluently the language of both plexiglass and the plastic bottle: I make them sing and dance,” he says.

Both the upcoming Bottled River and Bottled Ocean projects will take shape in collaboration with the public, with calls for donations of used (and rinsed) plastic bottles. Translucent plastics such as water and fizzy drink bottles can be dropped off at MTG and the Aquarium, while HCAG is requesting opaque plastics such as white orange juice bottles.

These will then be transformed into artworks with the help of school groups during workshops held over the course of two weeks at each venue. These were fully booked well in advance, and schools taking part include Maraenui Bilingual School, which Nuku himself attended.

Nuku explains that “the treasure of Bottled Ocean lies in the experiences of all the people – particularly the young people – who become part of the project on its many different levels”.

Nuku will give artist talks at both HCAG and MTG, with beach clean-ups and other events taking place over the course of the exhibitions. - Supplied by Napier City Council