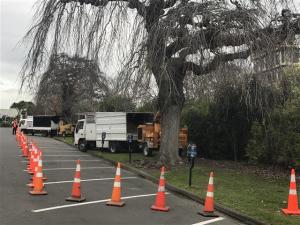 The removal of overgrown shrubs and weeds along Railway Rd and Russell St South started this week, with new fences and planting to go in over the following month.

The clearing will also see the removal of some poorly performing silver birch trees which will be replaced with native species to match those in the area.

The work, on both sides of the railway line between Eastbourne St and Southampton St, will open up street views through to Civic Square.

The fencing will match that which runs alongside the railway line in Russell St North. The new planting will replicate that within the city centre block, including a number of native shrub species.

“In effect we are extending the style of fencing and planting already in place along Russell St for another two blocks.

“We all recall what a wonderful difference it made when we removed the old bus stops from in front of Civic Square and the historic Women’s Centre. I think this is another of those relatively small changes that is going to make a world of difference to our visual enjoyment of our city.”

The shrub removal is expected to be completed by the end of this week, with fencing going in over the next fortnight. Planting is scheduled for August.  All of this work is weather dependent.