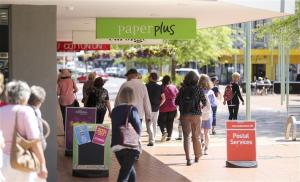 For the first time Hastings retail spending has topped $70 million over three months, outside of Christmas shopping periods.

The latest MarketView report, released on Friday, showed the total retail spend in Hastings central city for the three months to June 30 reached $70,098m. That was up $4m on the previous three months and up just over $4m on the same period last year.

“This is traditionally a quieter time of year given the cooler weather, however we are still going really well. As well as local spending being up, which is an indicator of a healthy economy and people’s confidence in our region, we have increased spending by visitors at a time when we don’t have a huge number of events bringing them here.

“I really do think this is a reflection of the excellent work over the last years that has gone into attracting visitors to our region – whether to events or just to enjoy our stunning district. Now they are returning and bringing their friends, and a great number of them are moving here and making Hawke’s Bay their home.”

The biggest national-level event held in the region within the three months was the Air NZ Hawke’s Bay Marathon.

The report showed that retail spending in both Hastings and Havelock North had out-stripped national growth figures.

In Havelock North retail spending in the three months to June 30, 2018, was up 7.8 per cent on the same three months last year. In Hastings the increase over the same time period was 5.2 per cent. The national growth rate was measured at 4.9 per cent.