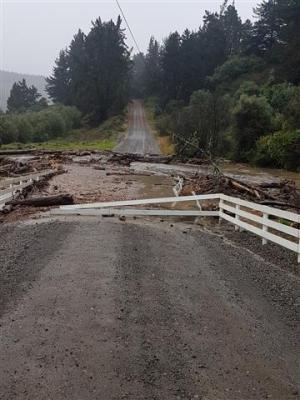 Fall out: With the McVicar Rd culvert blocked by forestry slash washed down from the hills above, flood water is forced over the top tearing out the road.

Forestry slash is under the spotlight in Hawke’s Bay, as damaging floods increase in both frequency and scale.
The issue has been highlighted at a national level, with devastating flooding and damage in Hastings and Gisborne making national news.

In Hastings there have been two heavy floods leading to evacuations this year, while in Tolaga Bay, north of Gisborne, serious flooding in March last year and in June this year left properties wrecked and people homeless. In all cases, forestry debris was believed to have been a major factor.

Forestry slash is made up of the trees and branches left behind after forest harvesting. During very heavy rain events this forestry slash can be washed down the hills into waterways, damming them, leading to a build-up of water in areas where it would normally have flowed out to sea.

Across Hawke’s Bay there are steep areas of forestry that have residents and councillors concerned, particularly in the hills around Waimarama, on hill country back towards the Kaweka Range, and on the steep slopes of Wairoa.

Hastings District councillors George Lyons and Tania Kerr are working with Hawke’s Bay Regional Council on the issue – looking for the gaps in regulatory oversight and on-the-ground management that will reduce the risk.

“In Hastings already this year we have had two 50-year flood events, and forestry slash has been a problem in both. This is a concern to anyone and everyone who lives on flood plains or near rivers, particularly in those areas downstream from forestry,” said Mrs Kerr.

“We all have to work together - industry, councils, central government – to see what we can do to manage what is a very serious risk to life and property.”

The regional council does have a new tool; a new National Environment Standard (NES) for forestry which came into effect on May 1. That requires forestry companies to provide council with a harvest management plan, which gives the council the opportunity to regulate and monitor how slash is dealt with.

“It is ironic that 30 years ago the issue was silt coming down the hills into the waterways during heavy rain events, and so there was a big push on planting pine trees over pretty much every square inch to help protect against erosion. Now we have a different issue to deal with, compounded by violent storms with ferocious rainfalls.

“I do believe that with the best endeavours of all involved we will come up with solutions. Those options will include making sure we have comprehensive plans for dealing with slash – and we have the new NES to help with that – and planting buffers of permanent thick native bush between the pine forests and the waterways. Effectively that would act as a natural slash catcher as a back-up to removing everything that we can.

“The forestry industry does not like this damage any more than the rest of us and they are taking it very seriously. We have had good working relationships over the last 20 or 30 years and we just have to continue working together to address this issue.

Mrs Kerr said Hastings District Council would be supporting and encouraging all those involved to come up with solutions.

The work includes making use of investigations in other regions. Gisborne District Council carried out an investigation after the 2017 Cyclone Cook flood, particularly looking at the impact of forest slash. The executive summary said about 70 per cent of the wood debris was pine. Of that, three-quarters was assessed as cut logs, with a minority of that assessed as stored logs ready for market. The balance was old weathered logs.

It said that while some areas had “slash catchers”, these “can be ineffective . . . [by being] over-topped or bypassed”.

The responsibility for forestry sits with both regional council and district council. The planting of forestry is managed under the Hastings District Council District Plan, as are resource consents for earthworks, forestry roads and on-the-ground operational facilities. Regional council manages the flow-on effects, such as slash washing into waterways and onto beaches.