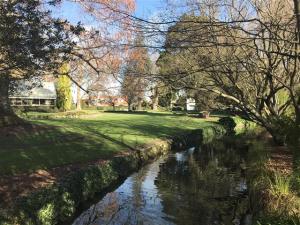 With a major revamp of the Cornwall Park playground scheduled for this year, a decision has been made to review the management plan for the whole park.

The review of the 10-year management plan is not due until next year, however given the funds for a  playground upgrade are in this financial year it makes sense to do them both at the same time, said Hastings District councillor and Our Places portfolio holder Malcolm Dixon.

An open day for public input will be held on Sunday 29 July between 11am and 1pm, at the John Holt Memorial House, off Roberts Street. The discussion will include both the proposed $1 million playground upgrade and the overall management plan.

“While doing it this way means we will be reviewing the management plan slightly early, I do think it is more efficient and will provide better outcomes than looking at the two individually.”

An upgrade of the playground would not affect any of the other main areas of the park, including the cricket fields, Osmanthus Gardens, the outdoor concert area, or the mature trees walkway. Ideas so far included having a much stronger link between the playground and the John Holt Memorial Display House, and that an area might be provided for food and coffee carts.

Constructing a large premier playground could require a short section of the stream nearest the playground to be piped both for space and health and safety reasons.

However there are other options, including keeping the playground at the same size but upgrading the play gear.

“We have not ruled anything in or out, and we really need maximum community input before starting work on a draft overall plan for the park that we can bring back to the community, Mr Dixon said.

The newly formed ‘Friends of Cornwall Park’ is also feeding information from its members to Council for consideration as the plan is formed.

Spokesperson Marina Dinsdale, said the fortnight-old group “has 36 members and is growing”. One meeting had been held at the park and another was scheduled for this weekend, before Council’s meeting the Sunday after.

Members of the group are very passionate about the history, the birdlife – both wild and in the aviary, the trees and gardens, and the stream, she said. “But the history of the park, particularly the walls, seats and bridges constructed from the rubble of the 1931 earthquake, is the heart of the park. We do want that to remain so and look forward to working worth Council on the plan for the park’s management into the future.”

The management plan looks at all aspects of the district’s premier park, including the care of the premier Hastings cricket ground, the waterways, the playground, the protected trees, the cultural and historic features including the historic stone bridges and sculptures, the Osmanthus Gardens and the John Holt Memorial Display House.

“We know this is a much-loved park which provides a range of spaces for a myriad of activities. We really are not expecting that people will want major changes, but there may be some tweaking here and there or new ideas that we can look at,” Mr Dixon said.

To put forward your ideas on improvements, or just to let us know which are your favourite parts of the park, see: www.hastingsdc.govt.nz/…/consult…/cornwall-park-rmp