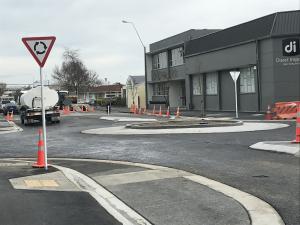 Construction of a new roundabout at the intersection of Nelson and Eastbourne streets is now mostly complete and open to two-way traffic making for a safer, more efficient flow of vehicles in the busy area.

Concerns about the dangers of the busy intersection, which has about 10,000 cars going through it every day, prompted the Hastings District Council to investigate safety options.

Over the past five years there have been 25 crashes at the intersection, 21 of them involving turning vehicles.

The public were asked for their input on whether they thought a roundabout would improve the situation, and 97 per cent of those who took part were in favour of the initiative.

During construction the intersection was closed to through-traffic in the interests of public and worker safety, and to complete the project as soon as possible.

Hastings District Council transportation manager Jag Pannu thanked the public and nearby businesses for their patience during construction, the completion of which would mean improved road safety in the area.

There will be minor ongoing works at this site but these are unlikely to impact traffic movements and access.

Council’s works and services committee chairman Kevin Watkins said the council appreciated the public’s input and support for the roundabout that would vastly improve safety and traffic flow.

“We are very pleased that motorists will now be able to negotiate this intersection with ease and much less risk of accidents.”

In order to avoid further disruption at this site, the council took the opportunity during the roundabout works to replace the water and storm water infrastructure under the road that was due for upgrading.