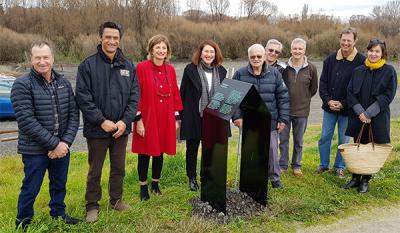 The area between the Tukituki River mouth and Clifton has a rich history that’s set to come alive through the creation of the Te Matau a Maui Arts & Heritage Trail.

At the end of last week the first of a series of marker post storyboards and public artworks was unveiled at Black Bridge, where the trail would follow the cycleway to Cape Kidnappers taking in the coastal communities of Haumoana and Te Awanga.

Cape Coast Arts & Heritage Trust trustee Martin Bates said the idea for the trail was raised during the preparation of the Hastings District Council’s Cape Coast community plan when locals agreed on a project that best represented what they liked about their area.

“We have unique and compelling stories to tell; stories that until now have largely been hidden. We believe that by sharing these stories along the very public and well-used trail we will keep them alive both for the coming generations and for visitors,” Bates said.

When finished the trail would include eight marker posts describing the natural and human history of the area, as well as some large sculpture installations by local artists including Jacob Scott, Amy Lynch, Rick Terstappen and Louise Purvis, acting as visual representations of the area’s history.

The trust had enlisted visitor experience developer Lily Frederikse to help with the project, who said there were many significant stories linked to the Cape Coast area.

“Our Arts and Heritage Trail makes these stories accessible to the community and visitors offering the best in cultural tourism by showcasing the history and contemporary character of this iconic coastline.”

Hastings District Council helped kick start the project with a $20,000 donation from the Contestable Grants Fund, allocated annually for projects that demonstrated they met the council’s aim of “building a safe, liveable, sustainable community”.

The Cape Coast Arts & Heritage Trust had already raised more than $80,000 to enable the completion of the marker posts, and was now targeting phase two funding for the landscape installations, with the goal of having the trail completed in 2019.

Bates said the successful completion of the project depended on funding from local businesses and organisations, and approaches had been made to a number of parties and a Give A Little page established

Hastings mayor Sandra Hazlehurst said Te Matau a Maui Arts & Heritage Trail was one of the jewels in the crown of the popular cycling and walking trails in the district.

“The Trust has created one of the most enjoyable trails in the region, because it tells the history of the first Maori and Europeans in the area.

“They have worked incredibly hard for a long time to bring us this wonderful asset, and I would like to congratulate them and acknowledge their perseverance and dedication to tell our stories of the coast and Heretaunga.

“We look forward to the addition of all the stories that will be told and the outstanding public art to be installed throughout the trail.”

Weather permitting, the installation of the remaining marker posts was expected to be completed by the end of this week.