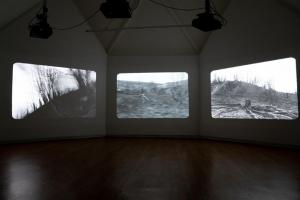 Ghost Scrub is one of seven films by Joyce Campbell to feature at the Wairoa event.

For the first time since its inception EAST 2018 is extending to Wairoa, with a free screening of art films by contemporary artist Joyce Campbell.

The comprehensive show features a selection of seven film works produced by the artist who grew up in Wairoa, and now works between Los Angeles, California and Auckland where she is an Associate Professor at the University of Auckland Elam School of Fine Arts.

The films explore the relationship between art and the world we live in, likened by exhibition curator Bruce E. Phillips to what theorist Donna J. Haraway refers to as “The Dithering”, the current period of time that’s rife with indecision, affecting our ability to address the grave environmental issues that threaten our existence.

Numerous artworks within EAST 2018 reflect Haraway’s argument, says Phillips, while at the same time considering the complications that hinder our ability to make decisive changes or to propose ways that we might proactively rebuild our relationship to the earth.

“Haunted by a soundtrack of native birdsong this immersive installation alludes to the trauma caused by sacrificing an ecosystem for human need.”

Another work showing in Wairoa is The Reef, a 16mm film of waves breaking on an endangered coral reef in Fiji that explores the analogy between two dying forms – the analogue film and climate-stressed environments.

The free event for all ages will run at the Gaiety Theatre on the Wairoa River walkway on Saturday, October 13 from 12pm to 4.30pm.

During this time the films will play on a loop over two sessions – one from 12pm to 2pm and another from 2.30pm to 4.30pm, so people can pop in and out at their convenience.

The Eastend Café next door will be open all day for purchasing refreshments.