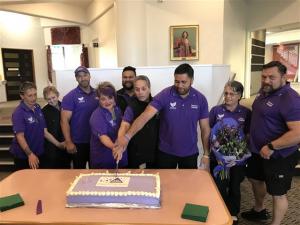 The City Assist team, including three of the original members cutting the cake, Sumiko Goulton, left, Herman Godinet and Michael Godinet, celebrated their fifth birthday at the council chambers.

When it began, the Hastings District Council’s City Assist programme was little more than an idea - inspired by a similar initiative that was being run in Rotorua.

Today, the 12 ambassadors that currently make up the Hastings and Flaxmere City Assist crew celebrated the programme’s fifth birthday and reflected on how far things had come.

Herman Godinet said he was very grateful to be one of the four original City Assist ambassadors, known to the community for their bright purple uniforms and friendly manner.

“When we started we didn’t know what we were getting into - we were just told to go and write our own job description - we created our own jobs.

“If the success of that is measured by the fact we have managed to last five years, the credit has to go to the people involved – their roles and their values.”

He said each member of City Assist was a grandfather, grandmother, parent, brother, sister, uncle, aunt and more.

“We all bring all those roles to fill this one – it’s not the uniform that makes us, it’s what we fill the uniform with – it’s that diversity that makes it a success.”

Mr Godinet noted that the flexibility to manage the range of assistance required – from dealing with unsociable behaviour to helping tourists and visitors - was also a valuable trait evident in the 12 current, as well as past, City Assist ambassadors.

“Our job description is we are bridge builders and we put out fires – that’s stayed the same since we started.”

Hastings mayor Sandra Hazlehurst said it was seeing what city ambassadors were doing in Rotorua just over five years ago that sparked the idea of something similar being introduced to Hastings.

“They were wonderful ambassadors helping tourists, but also looking after safety and security.”

She said both Hastings and Flaxmere City Assist (Flaxmere was introduced two years ago) were not only the eyes and ears of the CBD, they were Hastings Proud ambassadors who went above and beyond their job descriptions.

“To see the team down at the Ross Shield on Saturday was heartening – you take the time to support our communities.

“Also at the Age Concern Flaxmere Christmas lunch, you were helping getting food ready.

“You are community leaders first and foremost and we are very proud and grateful for the amazing work you do.”

“The affect you have had on the CBD has been massive and widespread – you are first on the scene and always there to help – we are all very thankful to have you here.”

A small gathering was held to congratulate the City Assist team at the council chambers this morning where they were presented with a large purple cake, which they planned to take out on the job with them today and share with members of the public.