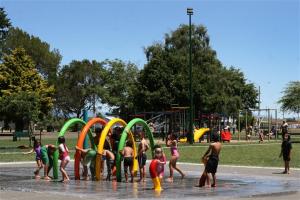 It’s nearly summer and with the warmer weather upon us the district’s splash pads are up and running to keep cool over the months ahead.

The splash pads at Cornwall Park, Flaxmere Park and Kirkpatrick Park were officially switched on for Labour weekend, and subject to any potential water restrictions, will remain on until the end of summer.

It had initially been hoped that the new play equipment would be installed and ready for use before Christmas.

While the equipment had been purchased and groundworks to prepare the area had begun, concerns that the equipment would not arrive in time, and that there may be delays due to the weather, have led to the opening date being delayed until February next year.

While the new parts of the playground would not be available until then, the delay has meant the existing playground and splash pad can be guaranteed to be open until that time.

The upgrade is part of a $1.2m, 10-year plan for the 17 hectare park, where community requests for the splash pad, new toilets, fencing, lighting, car parking, picnic furniture, exercise stations and a shared walking and cycling track have already been completed.