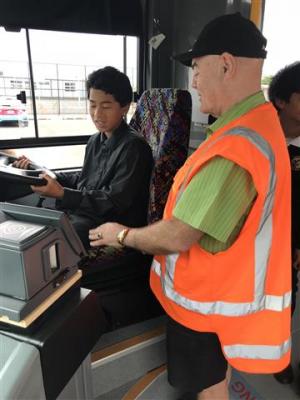 About 60 students from Flaxmere College got the chance to hop in the bus driver’s seat recently for a first-hand view of how to stay safe on their bikes when cycling around town.

The school was one of two taking part in the most recent round of Share the Road workshops hosted by Hastings District Council’s iWay programme, Sport Hawke’s Bay and Hawke’s Bay Regional Council’s Go Bus.

During the workshops a bus is parked at the school and bikes positioned around it to show the students the safe distance they should be riding so the driver can still see them.

They then get a chance to sit in the driver’s seat for a first-hand experience of what the driver can and can’t see.

This helps them learn how to position themselves when riding on the road.

At the Flaxmere College workshop, Go Bus driver Stephen McLaren also talked to them about the problems drivers have with cyclist visibility and behaviour, advising them to stay more than a metre and a half away from buses and to ride in single file.

Flaxmere College head of physical education and health Jo Lucas said the opportunity for the Year 7 to 9 students aligned directly with the school’s PE cycle safety programme being delivered this term.

“Students reported back in class about key messages, particularly the importance of the distance they should keep from the bus and staying in the cycle lane.

“They enjoyed the chance to sit in the seat and see things from the driver’s perspective, which was a real eye-opener.”

A second workshop was being held at Heretaunga Intermediate today.

Share the road campaigns are held each year, and complement iWay’s promotion and encouragement of active transport options, coupled with a focus on safe and considerate behaviour by motorists towards cyclists, and increased awareness and safe behaviour by cyclists.

The Share the Road campaign is part of a broader iWay safety strategy, which includes other initiatives such as: “Share with Care” - promoting the safe and considerate use of the shared pathway network, and “Be Safe, Be Seen” – conducted in autumn and early winter when daylight hours shorten.