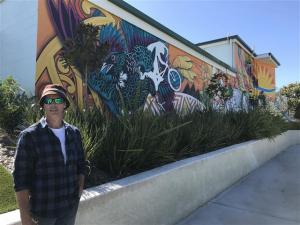 Colour is the outstanding feature of artist Brandon Blair’s murals and it’s been used to striking effect in his recently completed artwork on the wall bordering the Havelock North village pool.

It’s the third mural to have appeared on the Hastings cityscape in the last month – this one commissioned by the Hastings District Council as an addition to the other two “Make Your Mark” murals – one by Cinzah Merkens on Eastbourne St and the other by JiL of Aotearoa at the Havelock North Village Green.

As with the other two murals it fulfilled the Landmarks Trust’s criteria to reflect the district’s landscape, architecture and history.

A former signwriter, Mr Blair has in the past five years focused on murals through his business Crimson Flower, completing numerous works around the region, particularly in schools.

He was also supported by the Hastings District Council to create a mural for a wall at the rear of the Heinz Wattie’s Tomoana Rd plant.

“Kids love colour and I wanted to keep it nice and vibrant, brightening up the area that the kids are playing in, and also the area outside the pool,” he said.

Children themselves are a dominant element of the design, some painted in monochromatic black and white to stand out against the rest of the coloured area, the others pictured underwater with goggles on, painted in vibrant blue outside the pool entrance.

People engaged in activities such as running and cycling also make an appearance, as do native birds such as the tui and kereru and elements of the region’s renowned food and wine offerings.

Mr Blair said the overarching aim was to make the mural bright and positive and he had got a lot of feedback while painting it – a task that took about 90 hours to complete.

“I got heaps of positive comments – the kids loved it and were asking me lots of questions while I was there.”