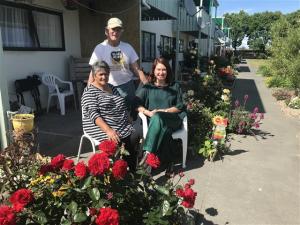 The winner of this year’s Petal Power gardening competition is a keen gardener whose passion for growing plants has spread to his neighbours, adding onto the beautiful garden space he has created.

Swansea Village resident Michael Green was one of up to 100 people who entered the Hastings District Council competition run between its nine senior housing complexes located across Hastings, Havelock North and Flaxmere.

Full of flowers such as roses, carnations, hollyhocks, as well as the odd vegetable thrown in, Mr Green’s garden at his Flaxmere abode stood out for its beauty, with the council’s senior housing judging team noting the fact he had inspired other residents to get gardening.

Having run out of room outside his unit, he had also planted at other areas around the complex.

“I like the old English gardens – I put it in and if it grows it grows,” said the green thumb who has lived at Swansea Village for about four years, and brought some of his plants with him from his former home.

“I have always liked gardening but with my job I never got the time to do it, so it was when I moved here that I really got into it.

“A garden has to be something you like to sit down and enjoy.”

His enjoyment is shared by other residents, some of whom have created their own gardens, such as Rebecca Te Aho, who Mr Green said had more of a wild New Zealand garden compared to his English inspiration.

Hastings mayor Sandra Hazlehurst visited Mr Green this week and said it was wonderful to see his beautiful, vibrant garden.

“He has transformed the gardens and inspired others. When he arrived four years ago the gardens were stones and weeds.

“The Petal Power competition has brought our community together to celebrate our beautiful Hastings district and make us so proud. I look forward to seeing the gardens of our other residents.”

While Mr Green was the overall winner, Myra Ellmers from Tui Vale and Peter Johnson from Parkhaven were also highly commended.

Judges’ recognition awards were also given out to competition entrants who had either gone out of their comfort zone to try something new, or regularly helped others in their gardens.

These awards went to Nancy Wilkinson from Tui Vale, Joan Fogarty from Elm Grove and Akol Timu from Kereru Heights.

Parkhaven Village was judged the best complex and a meeting would be held to discuss whether they wanted cobblestones laid for shared barbecue area as a prize.

The other winners received prizes such as hose reels, directors’ chairs, vouchers for local restaurants and several different supermarket vouchers that were kindly donated by Direct Earth Electrical, MEP Plumbing and Carpet Court.