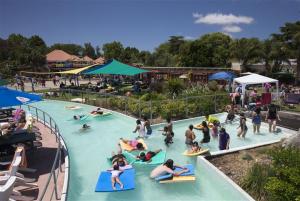 Summer is here and people have been heading to the district’s outdoor pools in droves since just before Christmas, with visitor numbers up on last year across all facilities.

Top of the list is Splash Planet, a perennial favourite for locals and out-of-towners alike, which is tracking ahead of last year in terms of numbers.

Since it opened on November 12 last year until January 9 this year, 59,420 people have passed through its gate – compared to 56,467 for the same period last year.

A day at Splash Planet usually means grabbing a snack at some point, and in that same time-frame 8,438 ice-creams have been served, and 6507 punnets of chips sold, along with 1160 pies and 1209 pizzas.

Open seven days a week for most of its summer season, Splash Planet will reduce its hours to weekends only, 10am to 5.30pm, from February 9 to March 31.

The summer heat has also driven lots of people to the district’s other outdoor pools, again leading to large visitor number increases from last year.

From December 20 to January 5, 3,863 people headed to Frimley to cool off, not counting four private bookings bringing 600 swimmers.

This was compared to 1,782 in the same period last year.

The busiest day was January 2 when 581 people made use of the facility.

The Havelock North Village Pool attracted 4,089 people between December 20 and January 5 (up from 2,816 last year) – its busiest day also January 2 when 525 people went through the gates.

While the Clive War Memorial Pool is closed for maintenance from January 7 to January 27, groups such as the Trojans and Greendale Swim Clubs and the Waimarama Surf Lifesaving Club are also making good use of the Village Pool during that time.

Hastings District Council group manager community facilities and programmes Alison Banks said it was great to see all the facilities being so well used, and that there were positive changes for the community swimming pools in the pipeline for next season.

“Staff have suggested some improvements for next season such as more shaded areas closer to the pools, play features in the toddlers’ pool and maybe a volley ball court at Frimley.”

Mayor Sandra Hazlehurst said the much-loved Splash Planet was a drawcard to both visitors to Hastings as well as locals.

“It has been so awesome to watch the many, many people having fun and enjoying this wonderful tourist facility over the holiday period,” she said.