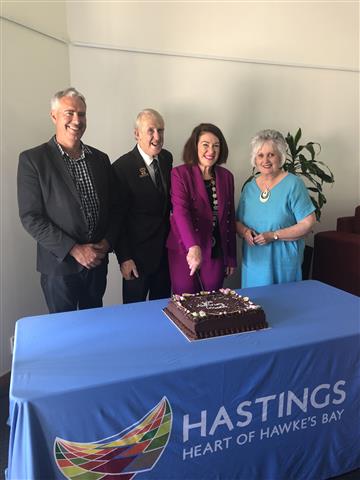 Memories of some of the most turbulent years in Hastings’ political history were shared on Sunday, at an event to commemorate 30 years since the amalgamation that formed the Hastings District Council.

In November 1989, Hastings District Council was born from the amalgamation of Havelock North and eight of the 10 old ridings (areas) of the former Hawke’s Bay County Council, as well as part of Taupo County.

The lead-up to this merger was polarising, with particular criticism coming from the Havelock North Borough Council, whose mayor Harry Romanes was concerned the prospects for the village would not be improved under the new regime.

Hastings City mayor Jeremy Dwyer, however, was unwavering in his encouragement for the merger and the benefits it could bring.

On Sunday, past and present councillors as well as community members came to the Havelock North Function Centre to hear from historian Michael Fowler, and a panel discussion comprising Jeff Whittaker, Mark von Dadelszen and Megan Williams, accompanied by questions and comments from the audience.

Tukituki National MP Lawrence Yule, who presided as mayor over Hastings District Council from 2001 to 2017 acknowledged the tensions at the time, as well as former mayor Jeremy Dwyer’s (who was in office for 15 years) proficient handling of the situation.

He said the Hastings District Council today was an effective, efficient, high performing local body, mostly absent of the political rifts seen at some other councils.

She noted the Hastings District Council’s coat of arms told the story of the councils through the combining of their symbols: the lion and fern leaves from the Hastings City Council arms, the cross from the Havelock North Borough Council arms and the carved cross and sun from the arms of the Hawke’s Bay County Council.

“This reform of our local government was contentious and highly emotive, for both the people of the rural community and the urban community.

“In 1989, I was a young business woman in Havelock North, I clearly remember the nervousness and the apprehension of what the change with amalgamation would mean for the Havelock North people and vividly remember the coffin being carried down Te Mata Road past my fruit shop.”

She said the changes had generated many positives for the community, including a strong rural community board that brought a rural voice to the council table.

“Today Hastings District Council looks after and provides services to 80,000 people across a district of 5000 square kilometres, with 1600 kilometres of rural road and seven small communities.

“Havelock North’s identity is stronger than ever before and Hastings city is going through significant transformation and investment.

“Across the region our five councils are working hard to ensure we collectively achieve the best outcomes for our people.”