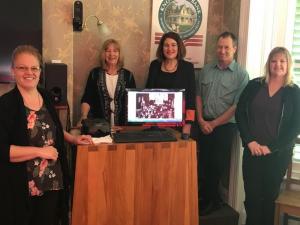 Watching the dress styles, hairdos, car makes and children’s dress-up costumes appear as a new scanner reveals images from mid-1900s film reels triggers nostalgia in those who remember the days; and wonder in those too young to have experienced them.

A gathering of Knowledge Bank supporters at the charity’s home in Stoneycroft Homestead, Hastings, on Tuesday saw the first of an estimated one million photos in the Spiller collection appear on screen. The scanner was ordered in the wake of the digital history archiving trust being loaned 22,000 rolls of film for digitising by the Spiller family. Russell Spiller ran a photography business in Hawke’s Bay from the 1940s.

Without the new technology it was estimated that cleaning, viewing and digitising all the images would have taken decades, said Hawke's Bay Digital Archives Trust chairman Peter Dunkerley.

Knowledge Bank staff are hoping that with the help of their volunteers, the films can be digitised ad made available on-line within about four years.

Amongst those at the Knowledge Bank on Tuesday were Hastings District councillors Rod Heaps and Ann Redstone, acting mayor Sandra Hazlehurst, and two of Mr Spiller’s four children, Perry and Sherrise.

Perry Spiller said while a lot of his father’s commissions were weddings, balls were also very popular: “The police ball, the plumbers’ ball, the hairdressers’ ball – everyone sector had one. One of the big annual events was the Napier Mardi Gras which everyone went to. There was a big background put up with the year on it and everyone stopped there to have their photo taken.”

Events that may seem small through today’s lens were cause for celebration in earlier times. “I remember going with him to a little settlement way up in the hills where they were being connected to the national grid. It was a big occasion and they booked our father to photograph the event.”

Perry and Sherrise both remembered constantly being photographed. “Dad would come home and say he had a few frames left to use up. We were very good at responding to: ‘and pose’,” Sherrise laughed.

The Hawke's Bay Digital Archives Trust was set up in 2011 to ensure the “wealth of fading photographs, letters, recordings and much more stashed away in old shoeboxes and family collections” was not lost forever, said Mr Dunkerley. The trust opened the doors of The Knowledge Bank in December 2012.

The scanner was purchased using funds provided through the Hastings District Council annual contestable grants round.