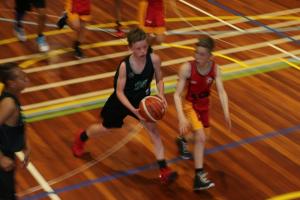 Speeding: These youngsters from Manawatu (in black) and Taranaki were leaving nothing in the tank as they

More than 1400 visitors have arrived in the region this week – ready to do battle on the basketball court.

The under-13 Central Regional Basketball Championship are being held in Hastings and Napier this year, attracting 33 teams from the Wellington, Manawatu, Taranaki and Whanganui regions, as well as from across the East Coast.

Hawke’s Bay last hosted it in 2015 with Wellington doing the honours last year before the Bay again scored hosting rights for this year. The competition is being run over two venues, at the Hastings Sports Centre and Pettigrew Green Arena.

The players are aged 10-12 so those from out-of-town are typically accompanied by their parents and siblings. Between the players, coaches, referees, team managers and families from out of Hawke’s Bay, Basketball Hawke’s Bay estimates that more than 1400 people have arrived into Hastings and Napier, staying about four nights.

The competition kicked off yesterday (October 11), with the two of the six Hawke’s Bay teams hitting the court at 9am, one playing Porirua, the other Whanganui. The first of the finals start on Friday, with the boys and girls grand finals played at 6pm on Saturday at Pettigrew Green Arena. The games run from 9am to 6pm on each of the four days and spectators are welcome.

Hastings District councillor and former principal Malcolm Dixon says this kind of event is important for youngsters and the school holidays is a perfect time for it. “At this age they have heaps of energy and they like nothing more than tearing around playing sport and then cheering on their mates.

“They are getting learning experiences – travelling; competition; co-operation; culture; while having a lot of fun. Best of all, they are getting to experience our fantastic region and my bet is that they and their families will be back.”