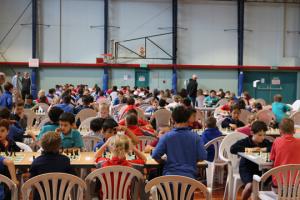 The concentration in the air was palpable as youngsters battled each other over chess boards today.

Nuhaka School students, who made the more than two hour road trip down to Hastings for the competition, had a great day, winning three of the four age categories.

The annual tournaments, one for senior students in May, a teams’ tournament in August, and the junior tournament, have been held for near-40 years, said Hawke’s Bay Chess member Alan Berry.

“Hastings District Council has a long history of holding this competition in partnership with Hawke’s Bay Chess, and we are very proud of it,” said Council’s social and cultural development committee chairman Malcolm Dixon.

“Chess is an activity that suits students from all types and sizes of schools, from rural to urban, and encourages both critical and strategic thinking, as well as concentration and sportsmanship. It is wonderful that teachers, parents and the chess club continue to put a great deal of effort into supporting the competition.”

Nuhaka School principal Mick Chapman, said the game had a strong following amongst his school’s 103 pupils. “It started with a letter from [the late] Genesis Potini and the Eastern Knights chess club, offering to help promote chess in schools. Now we have a trophy at the school called the Dark Horse Trophy.”

Potini was featured in a film called The Dark Horse, starring Cliff Curtis, based around his strong chess skills and his development of the Eastern Knights chess club.

“We play a lot of chess at school . . . the Eastern Knights come down to do chess workshops twice each term,” Mr Chapman said. “There are enough chess sets in the classrooms for all the children to play. We take part in all the competitions in Hawke’s Bay and the Tairawhiti-Gisborne region.”

The winners of today’s tournament were: