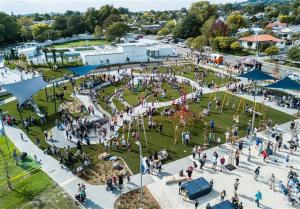 People magnet: The revamp of the Havelock North Village Green has been a huge success, both in terms of pleasing residents and garnering awards.

The redevelopment of Havelock North Village Green has earned one of 20 national awards, bestowed by NZRA (New Zealand Recreation Association).

At an awards ceremony in New Plymouth last week, the project received one of two merit awards in the ‘Outstanding Project’ category, with an Auckland project taking out the top spot.

Hastings District Council parks and properties manager Colin Hosford attended the awards and said the judges particularly recognised the extensive consultation used to come up with the design for the playground and park; and the role of the local community and partnerships in contributing to the Village Green’s final success.

“The judges were impressed by some of the innovative design features and particularly liked the interactive water feature that allows people of all ages and abilities to engineer how the water meanders through the playground from five different stations and through nine different weirs” she said.

Of particular note was the input of the community into the moving of the historic Havelock North Cricket Pavilion into a central position near the playground, and its sympathetic restoration, said Mr Hosford. The community encouraged Council to tackle the project, and raised funds to help it be completed.

He said the Village Green had been a “huge success” and it was very pleasing to have the work by the community and Council in achieving that success recognised with an industry award.

The awards were instigated by NZRA to recognise the development of excellent recreation projects and programmes. “NZRA believes recreation creates great New Zealanders. People who are healthy and well connected to their communities and the environment grow up with the opportunity to pursue their dreams and make lasting contributions to society,” said Ms Hurdle.