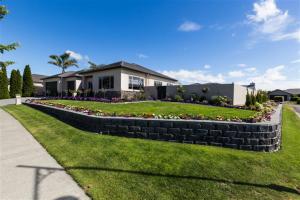 Putting love and effort into their gardens has paid off for the 18 keen gardeners awarded prizes in this year’s Tremains Spring Spruce Up competition.

Mark and Anne Lukkassen won the Before and After category for the makeover of their Russell Robertson Drive garden, also taking home a $2,000 cash prize.

The awards, which celebrate people who help keep Hastings beautiful by taking pride in their properties, were announced last night at a function at Hastings District Council.

The Open Category recognised people who had a consistently beautiful garden.

The Lukkassens moved to their Russell Robinson Drive home in April, and set about removing shrubs and trees and adding colour.

“With the changes we’ve made, we now have expansive views of the Taupo hills and more sunlight”, said Anne.

But the biggest change for the couple has been people stopping by – and not always for the obvious reason.

“One day a few vehicles came screeching to a halt when Mark was out in the garden – they saw him lying on the ground and were very concerned, but he was actually just trying to see if his grass seed was coming up! But we do often get people stopping, even in cars, to tell us how beautiful they think our garden is.”

Abby and her family have lived in their home for five years now, having built on the ‘really good bones’ the house had when they purchased it.

“We really just had to put our own personal touch on it.  The house already had character, and as our first family home, we wanted something safe and secure, with the white picket fence.

“Homes hold so many loving memories - that’s why we have the heart on the door – it’s so nice to come home to.”

Second place in the Open Category went to Ruby Atkins, for her Louie Street front garden, while third place went to Cara Hart for her Burnett Street property. They received cash prizes of $1,000 and $500 respectively.

In the Before and After category, second and third places went to Abby Hoare (Willowpark Road), and Amy Shanks (Pattison Road), and they also received $1,000 and $500 cash prizes.

Mayor Sandra Hazlehurst presented the awards. She said all of the entrants presented gardens they could be very proud of.

“I know the judges had a difficult time choosing between them. It is wonderful to see the efforts people have put into their gardens; these awards highlight the enormous effort our community makes to create a beautiful district, contributing to our civic pride.”

“Celebrating the efforts put in by home owners who, through their hard work, are helping Hastings to look as beautiful as it does is very satisfying.

“Our family has been in this region for generations and we are very proud of it. We are happy to be part of things like the Spring Spruce Up Awards which encourage people to take pride in their homes.”