Year of Chinese travel to NZ a Hawke’s Bay focus 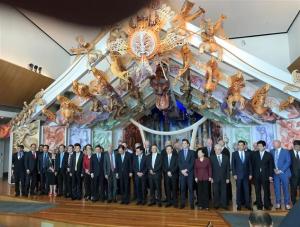 China has named 2019 the Year of Tourism to New Zealand, and Hawke’s Bay will be making every effort to attract as many of those tourists as possible to our region, says Hastings mayor Sandra Hazlehurst.

Investigating trade, investment and educational opportunities, innovation and potential partnerships were all on the agenda of the biennial New Zealand China Mayoral Forum, held in Wellington this week. China’s Year of Tourism to New Zealand was announced at the forum.

Mrs Hazlehurst with councillors Kevin Watkins, Geraldine Travers and Damon Harvey, were among the delegates from more than 30 towns and cities across New Zealand. Central Hawke’s Bay mayor Alex Walker also attended. Mayors from 13 Chinese cities were at the forum.

The theme of the two-day conference, which finished on Monday evening (December 4), was ‘Sustainable economies: Balancing economic development with the environment’.

For Mrs Hazlehurst one of the many highlights was meeting the mayors of the Chinese cities. “Meeting one-to-one allows us to build new relationships. That means when we want to discuss trade, tourism or educational opportunities between Hawke’s Bay and regions in China we already have a relationship that provides an excellent starting point for those conversations.”

“The NZCMF has been an enormous opportunity for Hastings to showcase our region’s high quality produce,” Mrs Hazlehurst said.

“Four Hastings wine companies helped sponsor the wine for the banquet on Sunday night at Te Papa and the Chinese and New Zealand mayors all loved our region’s wines,” she said.

Te Mata Estate was among the businesses to accompany the Hastings mayoral contingent to the inaugural forum in China two years ago, and attended again this year. “From having very successfully presented to delegations visiting Hawke’s Bay, we knew the value of meeting face-to-face with potential buyers and other influential people, such as mayors, from regions of China.

“We were very happy to attend again this year. For us it is about building on our already strong relationships and potentially introducing new people to our product.”

Mrs Hazlehurst said China had indicated that 2019 would be nominated as a Government-sanctioned Year of Tourism to New Zealand, Mrs Hazlehurst said. “We want to attract as many of the tourists as we can to Hawke’s Bay and will be working with our partners, including the district’s councils and Hawke’s Bay Tourism, to make that happen.”

The China-New Zealand relationship has continued to rapidly strengthen.

According to Local Government New Zealand trade had nearly tripled over the past decade. Business between the two countries climbed to $23 billion for the June 2016 financial year, from $8.2b for the year ended June 2007.