Sculptors in the public eye 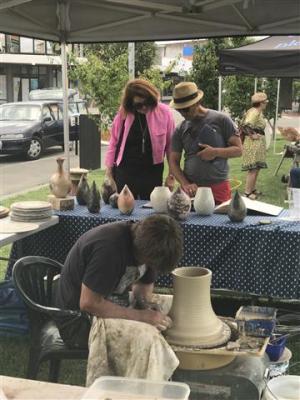 Nine sculpture artists working out in the open at Albert Square are more than halfway through their works, in anticipation of an auction of the pieces to be held tomorrow.

The three-day Hastings Seed Sculpture Symposium, organised by Arts Inc Heretaunga and supported by Hastings District Council, has attracted artists wielding tools from chisels and bare hands, to chainsaws and drills. Since Thursday, they have been set up under marquees, spending their days crafting their pieces and chatting to the public.

The event is one of a number being brought into the city centre to enhance vibrancy and encourage residents and visitors to spend their leisure time in the city.

Mayor Sandra Hazlehurst met the artists in the square today (January 26) and will be at the auction tomorrow, at 3pm.

“It has been great to meet the artists at work over the past few days and hear the stories about their sculptures.

“We are really proud to bring a symposium of this quality to our city – to our wonderful Albert Square. We are going to be doing a great deal of this type of event; celebrating our people while enjoying our wonderful weather in our vibrant city.”

The auction will be held at Albert Square at 3pm on Saturday, February 27, with the proceeds shared between the artists and Arts Inc. It is envisaged the symposium will be held annually.

Sean Geenty
Sean works as a sculptor in wood, often using chainsaws and power tools.  He trained at EIT for a Batchelor of Visual art and Design, specialing in sculpture. Noteble works are some of the figures that line the road near Waiohiki Arts Village, Napier, and a large beautiful work on the Puketapu Hill at Puketitri Road, just outside Taradale, made in collaboration with Hugh Tareha.

Chris Elliott
Chris Elliott is a self-taught, eclectic artist working in a variety of media and styles. He has been a self-employed, full-time artist for almost 20 years and, among other things, has won commissions to create a number of public sculptures in bronze, most notably, four-minute-miler Sir Peter Snell and New Zealand’s first democratically elected Prime Minister John Balance.

John Gisborne
John Gisborne has been working in clay for approximately 20 years and has been living at and is part of the Waiohiki Creative Arts Village. John started off his craft with his mother who was also a clay worker and running a pottery business. In the 1980s he worked with Alan Vickers at Mt Manganui, followed by a period with the Waikato Society of Potters as a resident potter. He had his own studio in Hamilton for two years and then for five years worked with the famous Barry Brickell at Driving Creek Railway and Potteries. John also worked in Scotland at Glasgow Ceramics for about 18 months before returning to New Zealand and taking up residence at the village.

Besides working as an individual artist John is an active member of the Taradale Pottery Club. Besides producing a range of domestic and decorative pottery John’s current work involves sculptural garden and water features which are predominantly inspired and informed by ideas of the ‘organic’ and ‘feminine’.

Stephanie Drew
Stephanie began working in Oamaru stone in 2001. Often words or descriptive phrases provide her with inspiration for her work, but she also draws on observations of natural forms and structures in her environment. Stephanie has a great affinity for birds with their unique forms. Her graphic design background gives her an understanding and appreciation of the effectiveness of simplified forms that are sensuous and evocative of movement or growth. She enjoys the challenge of working the stone with hand tools as this enables her to create three-dimensional artworks that have a natural flow.

More recently she began works with polymer clay and this offers her a chance to create three dimensional forms in a different way.

Francisca Obers
Of Cook Island, Maori and Dutch origin, Fran Obers has been carving a huge range of materials and objects from carnelian Tiki to Totara Pou as part of the Hastings Nga Pou installation.  Her work is always unique and as a female carver she has long been a pioneer in her field.

Stewart Brodie
"I refer to myself as a stone carver, not a sculptor. I believe that sculpture is the process of building an object up whereas carving is the removal of the medium to expose an object.”

His passion for art comes from his engineering background where he was inspired by the exacting detail, symmetry and strength required to create machines, buildings and structures. Although Stewart has done some free-form pieces, he prefers to create pieces that reflect mechanical movement in an inanimate medium such as stone. “My objective is to give people the want and need to touch or move parts of the carving. I love the feel of stone; both whilst carving it and when it’s finished - it cries out to be touched."

JiL of Aotearoa
JiL of Aotearoa creates interactive works of art, such as garden and forest landscaping, water features, climb-on sandpit features, and event, festival, and theatre props and decor. Able to design and create almost anything you can imagine . . . she'll give anything a go. JiL is working in a unique material called Pal Tyre, a form of cement made from recycled materials.

Kay Bazzard
Kay is a figurative sculptor in clay, based in Havelock North. She is known as a sculptor, working mainly with the human form, creating figures in hand-modelled clay, usually from life, and also as a writer, including as arts page contributor for Hawke's Bay Today.

Hugh Tareha
Hugh is a master carver of traditional Maori carvings in native timber. He is a descendent of Chief Tareha.

Hugh has whakapapa back to Tangaroa. He shares connections with the house Hau Te Ananui, Ruatepukepuke, and the traditions of whakairo, Maori carving. Based at his studio at Pawhakairo, Waiohiki Arts Village, Hugh’s style is recognised as being truly indigenous to the Napier area. His pou are dotted around the Ahuriri precinct, at the EIT Otatara campus, and on Otatara itself. A fine example of his primitive style is his carving of Wiremu Tamihana at the entrance to Waiohiki Marae. Hugh undertakes commissions in both traditional and contemporary forms but prefers to use native timbers.