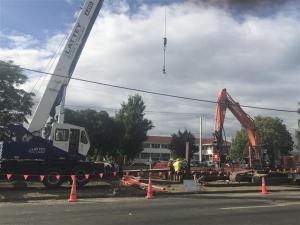 The first section, between Eastbourne St and Southampton St, was completed before Christmas. The second section, between Southampton St and Gascoigne St, was expected to have started in January, however the delayed issuing of a permit from KiwiRail allowing work close to its network had pushed the start out to this month.

Contractors Fulton Hogan advised this week that it still expected to have the project completed by the end of May.

This week a large storm water chamber is being excavated to the side of the road, with work moving out into the roadway next week.

From next week north-bound traffic travelling along Railway Rd during the day will be diverted along Murdoch Rd and Southland Rd into the city, with the reverse in place for southbound traffic. One lane will be open overnight. Access for residents and to businesses will be maintained throughout the project.

Hastings District Council works and services committee chairman Kevin Watkins said it was excellent that the project was back underway. “The delay has been unfortunate but it is very pleasing that the contractor has confirmed that they can still finish the project within the original time frame.

Detouring traffic around the work site was unavoidable, he said. “We’re constrained by the railway corridor on one side and homes and businesses on the other side. The very best thing we can do is work as efficiently as possible to get the project completed as fast as possible.”

“As with all projects of this magnitude, there are unfortunately impacts on the public and we thank everyone for their patience. We will get this completed as efficiently as possible.”

The 1200mm pipe replaces a more than 60-year-old version. The new one will address historical surface flooding issues in the area.