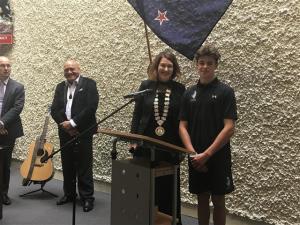 Jack Wilkinson at age 14 was the youngest member of the New Zealand under-18 canoeing team to attend the Grand Prix 2 Canoe Racing Championships in Sydney this month. He placed third in the K4500 Team event and fifth in the B Final – Individual K1.

He had received $250 from the Mayoral Fund to help with the costs of attending the championships.

“Jack has also been selected for the under-16 New Zealand team for Canoe Racing and will be competing again this weekend. We wish him the very best of luck,” she said.

Representatives of the 77-strong Hawke’s Bay Special Olympics Athletics Team also received congratulations from Mrs Hazlehurst for their efforts at the National Summer Special Olympics Games in Wellington in November.

“I’m thrilled to hear that after four years of training, so many of your team have also attained a personal best in different events – living up to the motto of ‘Let me win but if I cannot win let me be brave in the attempt’,” she said.

The team had received $600 from the Mayoral Fund to help with the costs of attending the games.