Where to with waste: Public consultation on draft plan 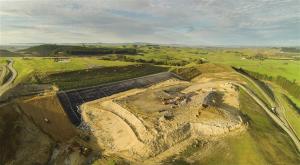 The major community conversation underway on the management of rubbish necessarily includes the cost.

The Draft Joint Waste Management and Minimisation Plan was released for public consultation last week. The draft plan has been put together by Hastings and Napier councils, as co-authors of the existing waste plan and co-owners of Omarunui Landfill.

Two main targets of the plan are to increase recycling by 20 per cent and decrease the amount of organic waste going to the landfill by 30 per cent. Achieving those aims will markedly increase the ‘life’ of the landfill, pushing out the cost of developing a new tipping area, which would cost in excess of $10 million for initial development.

To help achieve that aim, the draft plan is suggesting supplying dedicated recycling, green waste and rubbish bins to households across the urban areas of Napier and Hastings.

“Evaluating the success of other areas using the three bin system shows that it increased recovery of compostables and recycling rates in those areas, which can reduce the amount of rubbish going to landfill. We are wanting our residents’ opinion on whether they believe it will work here,” said deputy mayor and Joint Waste Futures Committee chairperson Tania Kerr.

A comparison of costs to residents of the proposed new options versus the existing options is not an exact science, given the varied cost of wheelie bin services and because cost and service levels in Hastings and Napier differ.

Residents using a private wheelie bin contractor pay for that bin (usually 140L or 240L) and the Council rate.

A household using only the Council kerbside rubbish service is paying $1.27 a week for the collection of a maximum of 120L of rubbish, plus the cost of supplying their own bags.

Residents using a private wheelie bin contractor pay for that bin (usually 140L or 240L) and the Council rate.

Costs in the draft plan

The draft plan includes a range of proposed options based, in the main, on supplying rubbish and recycling specific bins to Hastings and Napier urban households, with the indicated costs ranging from $4.09 to $5.31 a week, paid through rates. The option chosen and the tendering process will dictate the final cost. For all the potential options see: www.myvoicemychoice.co.nz/wmmp.

Submissions on the Draft Joint Waste Management and Minimisation Plan are open until March 23. To read the full document and make an on-line submission see: www.myvoicemychoice.co.nz/wmmp; or read the documents and pick up submission forms from the Napier and Hastings libraries or council offices. Submissions can also be posted to Private Bag 9002, Hastings 4156, or dropped into the Council buildings in Lyndon Rd, Hastings, or Hastings St, Napier.