“Awesome and amazing” ideas are needed for upgrades to Flaxmere Park.

Seven years into Flaxmere Park’s $1.2 million 10-year upgrade plan, Council wants to confirm that priorities set back in 2011 are still what residents want. Over those first seven years $900,000 had been spent in the 17 hectare park, including on the new playground, splash pad, new toilets, fencing, lighting, car parking, picnic furniture and the shared walking and cycling track. The remaining $300,000 is locked in, but the projects can be changed if community needs have altered over the years.

At the same time, Council is asking residents if money set aside to reshape and line the pond in th 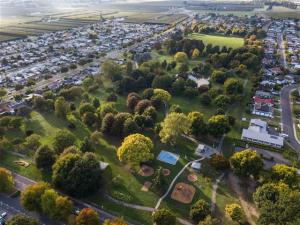 e park should go to that project, or be spent on different facilities in the park. The cost of the pond work is estimated at $250,000.

“It is actually great that the two funding discussions have come up at the same time. If we think carefully about this as a community, we can turn this year’s upgrade projects into something much more amazing.”

A number of items in the 10-year plan may no longer be required by the community. In fact, residents might want something quite different, said councillor Henare O’Keefe.

“Based on lengthy discussions at the time we set up the plan, the things we have scheduled include another car park and a road through the park. It also includes a cycling rest station with weather protection and iWay maps.

“So we are thinking before we go ahead with what is listed in the plan, we will come back to the community and check. Maybe we want to expand the things that have been most popular – such as making the hugely successful splash pad bigger; maybe more play gear – it could be lots of things,” Mr O’Keefe said.

“We are perfectly happy to upgrade the pond if that is what our community wants,” says Ms Poulain.

“But we don’t want to just go ahead and then find out that we should have been looking at something quite different.”

The pond needs to be fully upgraded to include an impervious lining to separate it from the aquifer which lies beneath it. To be able to lay the lining the existing pond will have to be dug out and rebuilt in an even shape, either round of oval, and the island will have to go. Early investigations show that the pond is likely to be about three-quarters the size it is now, and for safety will be less than 400mm deep.

The funding for the pond work will come from Council’s water budget, however there is the opportunity to instead use that money for something different in the park.

“That could be a children’s cycling ‘road’, like the one they have on the foreshore at Napier; or we could extend the playground or put in a whole new facility – this could be an opportunity to add this funding to the $300,000 we already have and come up with awesome ideas; or we may want to keep our pond.”

Exercise gear on the way

“It is great news that this equipment is on the way,” said Mr O’Keefe. Parks are about all age groups, and this equipment is most suitable for our older teens and adults. “We will have no excuse now not to get out there and enjoy our beautiful park which really is the heart of our community.”

Flaxmere is one of the district’s five premier parks (as opposed to smaller community and neighbourhood playgrounds) and was the first to undergo a comprehensive upgrade and have a new 10-year plan put together.

In the lead up to the plan being adopted in 2011, lengthy discussions with the community were held. Residents said they wanted to improve the playground, sport and exercise options, accessibility and safety. That led to a list of 22 items to be implemented over 10 years costed at $1.2 million, with many of the ‘big’ ones being installed in 2012. Those included the new playground and splash pad, the fencing of the playground, lighting and new toilets near the playground. Others have been the new car park, park furniture and barbecue, and the laying of a shared cycling and walking track around the edge of the park. Most recently disc golf was installed.

“Our people love our park; and the decisions we are about to make will keep it up-to-date and make sure it continues to be a place where we gather and enjoy each other’s company and events,” said Mr O’Keefe. “You only have to look at the turn-out for things like the annual kids’ duathlon, and events and festivals in the park, to see how much-loved it is. We want everyone to get involved in the next steps.”