History of Mayoral Portraits at HDC 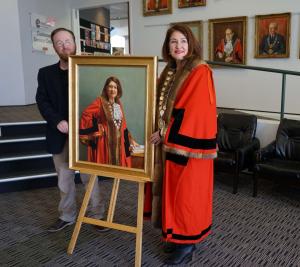 The oil portraits of previous mayors that greet visitors to the Hastings District Council chambers are now joined by our first female mayor.

Mrs Hazlehurst says: “I am truly honoured to be painted and set alongside my forebears.”

She says: “Freeman has captured in my portrait those who have stood and who stand steadfastly behind me. They are my family, my mentors past and present, and those who encourage and support me at every turn to be the best I can be, so I can do the very best for our people.

It has taken months for Freeman White to perfect the portrait; reworking it five times.

He says he wanted to give Sandra a feeling of authority in the portrait, without making her look overbearing. “The significance of this being the first female portrait amongst all men wasn’t lost on me and I wanted her to appear strong and confident yet approachable.”

The new portrait will hang alongside 21 others. It is a tradition started by the Hastings Borough and City Councils in the 19th century.

Mr White will have his name listed alongside esteemed artists such as Gottfried Lindauer, Walter Bowring, Peter McIntyre, William Alexander “Bill” Sutton, Harry Sangl and, more recently, Ion Brown, who have painted one or more of the mayoral portraits.

Mr White says it is a huge honour for his work to be included alongside such illustrious and renowned artists. “There are some very significant and historical names in the collection, in particular that of Gottfried Lindauer who is one of New Zealand’s most significant portrait artists.”

Mr White says it is an incredible collection for the city of Hastings to have, and signifies a large part of the city’s history and a large investment in culture and art. “It is great to have them on public display.”

The 39-year-old Hawke’s Bay artist was chosen to do the work after a strong recommendation from the Hastings art community.

Jonathan Brown from the Hastings City Art Gallery commended him for the commission. “He is best suited to create the style of portraiture fitting the historical significance of the work, and to sit beside other great New Zealand artists. He is a traditional artist who is known and respected around Hawke’s Bay’s art community,” Mr Brown said.

Mr White grew up in Havelock North and is a former student of Havelock North High School. He spent eight months in Edinburgh on a scholarship through the Scottish National Portrait Gallery.

Among his achievements is being awarded the New Zealand Adam Portraiture Award in 2006, which Mr White says “really put my name on the map”.

Mayor Sandra Hazlehurst says: “I have been moved by his incredible skill and we are blessed to have such a talented artist in our region.”

“Thank you Freeman for bringing to life my sense of duty to the community and my love of this opportunity to serve our people; it is a privilege and responsibility that invigorates me every day.”