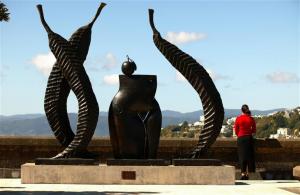 A striking Paul Dibble sculpture will be officially welcomed to Havelock North on Saturday by Governor-General Dame Patsy Reddy.

The Garden 2002 will stand almost four metres high once on its plinth. It is a bronze torso with a gilded apple, which will see it glow in the Hawke’s Bay sunshine. At night the sculpture and its surrounds will be lit.

The piece is the latest in a large number of public works placed across the village. A vision to make Havelock North an outdoor gallery was mooted 13 years ago by the Landmarks arts advisory panel of the day. This piece brings the number of large scale outdoor artworks, all within the village centre, to five.

The celebration of the newest sculpture will be held at 3pm on May 5, with Dame Patsy performing the symbolic unveiling. Paul Dibble will install the sculpture the day before, and he and wife Fran will stay for the ceremony.

The sculpture, which has an estimated market value of about $180,000, has been purchased by the MTG Foundation, using a donation from the Mills Family Charitable Trust. The MTG Foundation looks after and adds to an art collection begun some 120 years ago, which is held in trust for all Hawke’s Bay residents.

Hastings Mayor Sandra Hazlehurst said the statue was a very welcome addition to the stunning works already on display in the village. “We have a strong commitment to making the most of our places across the district by preserving our architecture and landscape, and the addition of public art.”

She said it was wonderful to have a sculpture modelled on Dibble’s bronze sculpture ‘Fruits of the Garden’ in Frank Kitts Park, overlooking the waterfront in Wellington City.  “Gifts such as this from MTG and the Mills Family Trust are much appreciated, and add substantially to the vision of the Landmarks Trust which focuses on celebrating and adding to the beauty of our district”.

Dibble is no stranger to seeing his works on display in Hawke’s Bay; there are at least 10 major works of his in the region including The Gold of the Kowhai, installed outside MTG in Napier. There are three on displays in Hastings schools and at least another six in private collections.

The renowned sculptor based in Palmerston North also has works on public display across the world, including a memorial in Hyde Park, London, dedicated to the New Zealand servicemen and women who had fought in armed conflict alongside British troops.

For more on the MTG Foundation see: mtghawkesbay.com/community/donate-support-MTG/mtg-foundation

For more on the Landmarks Trust see: www.hastingsdc.govt.nz/hastings/about-hastings/landmarks/activities