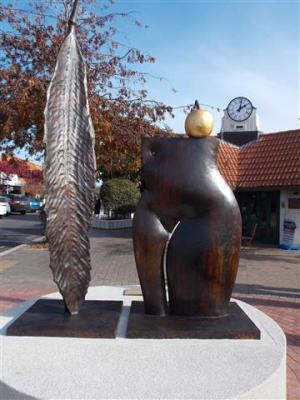 A crowd of 200-plus gathered in the middle of Havelock North on Saturday afternoon to welcome a striking new public sculpture.

The Garden 2002, by internationally acclaimed artist Paul Dibble, has pride of place just off the central roundabout, in front of the Havelock North i-Site.

Mrs Hazlehurst said it was very special for the community to have Dame Patsy in Havelock North to officially unveil the sculpture.  “We were very honoured and grateful to have the Governor General here to welcome the sculpture.  Together, they made a wonderful impression on the crowd”.

The statue is owned by the MTG Foundation on behalf of Hawke’s Bay residents. It was purchased using a donation from the Mills Family Trust to the foundation.

Mrs Hazlehurst said the Mills Family Trust donation was very generous, enabling a fifth large-scale public sculpture to be installed in central Havelock North. The addition contributed to a plan to make the village an outdoor gallery, mooted 13 years ago by the Landmarks Trust and supported by the community.

It also added to a sizeable number of major Dibble sculptures already in Hawke’s Bay – some in private collections, others in public view including the Gold of the Kowhai outside of the MTG building in Napier.

“We are extremely lucky to have at least 10 major works of Paul Dibble in Hawke’s Bay and this art work adds to the beauty and vibrancy of our Hastings district,” said Mrs Hazlehurst.